Jay Wright Misses the Old Big East, but Ready to Rep the New One 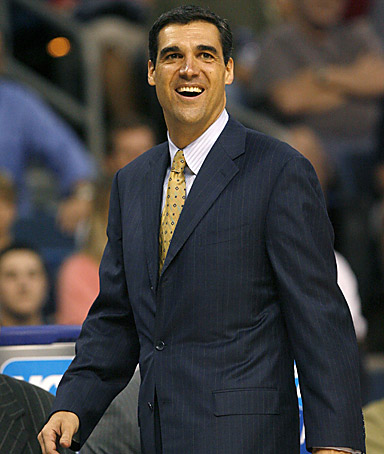 NEWARK — Jay Wright confesses he misses the old Big East. The Villanova coach came of age as a leader while matching wits against Jim Boeheim of Syracuse, Jim Calhoun of UConn, Rick Pitino of Louisville and Mike Brey of Notre Dame, among others. Those teams are all gone from the new-look Big East now, headed to the greener pastures of other leagues. “I miss the tradition and everything I grew up in,” Wright told SNY.tv after his No. 8 Wildcats improved to 14-1 overall and 3-0 in the Big East with an 83-67 victory over Seton Hall at the Prudential Center. “I grew up in it and I loved it.” Yes, Villanova stills plays Syracuse in the non-conference, but it’s not the same as an old-fashioned Big East battle. The Wildcats won’t play Louisville, UConn or Notre Dame at all this season, or in future seasons unless non-conference games are set up. Still, Wright, now the dean of Big East coaches at the ripe old age of 52, flashes a twinkle in his eye when he talks about playing in new venues, such as Butler’s Hinkle Fieldhouse, where the Wildcats opened the new Big East season by beating the Bulldogs, 76-73, on Dec. 31. “When you go to Butler, that was wild,” Wright said. He knows full well that the Big East won five championships since 1999 — three by UConn and one apiece by Syracuse and Louisville — and that those championship-winning teams are all gone now. But Wright insists the new league has depth and talent and its own appeal as a basketball brand “It’s just different but they’re all really traditionally strong basketball programs,” Wright insisted. “Xavier’s been to Sweet 16s, final Eights. Marquette’s been there. Creighton’s been there. Butler’s been in two finals, two final games. So it’s just different. “I miss what was comfortable to me, but I love what this is. There’s nowhere you go to play — nowhere — where it’s not a big happening.” What’s happening right now in the Big East is that Villanova is the only team ranked in the Top 25 and thus has become everybody’s Super Bowl. Just ask St. John’s, which faces the prospect of falling to 0-3 in the league if they don’t beat Villanova on Saturday afternoon at Madison Square Garden. In 2011, the Big East sent 11 teams to the Big Dance. This year? Maybe they’ll send four or five. Maybe. Villanova looks like a lock, and Creighton appears to have a strong shot. After that, some combination of Marquette, Georgetown, Xavier and maybe St. John’s have a chance. Nobody except Villanova — which beat Kansas and Iowa — really did themselves any favors in the non-conference. “I agree, because of our preseason, we might have put ourselves in a tough position this year,” Wright said, while pointing out that the Big East is ranked No. 3 in the RPI. “But I think all these teams are young and are going to be really good. And I think you might have a year like this, and you might have a year where there’s five or six teams that are Top 25. You could have that, too.” For now, though, Villanova appears to be the class of the new Big East. And with his old mentors and rivals long gone, Wright could be left looking to make a mark for the old guard come March Madness.