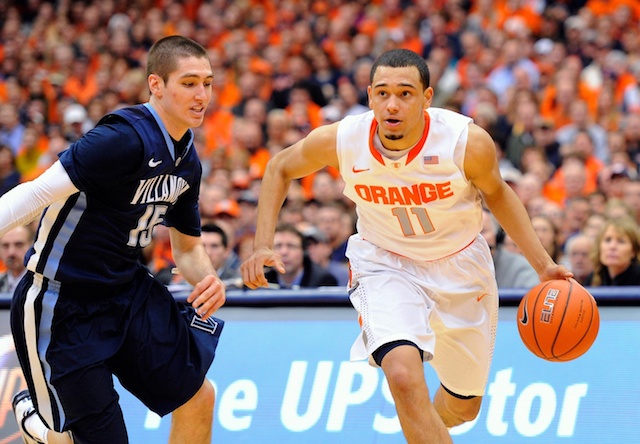 Syracuse freshman point guard Tyler Ennis was never included in the “Big 3,” Big 4″ or “Big 5” discussions of the top freshmen in America. But with the calendar about to flip to 2014, Jabari Parker’s Duke team isn’t undefeated. Neither is Andrew Wiggins, Joel Embiid and Kansas. Nor are Julius Randle and the cast of freshmen stars at Kentucky. Top-ranked Arizona, which features freshman Aaron Gordon, remains unbeaten, but Gordon doesn’t play nearly the role on his team that Ennis does for Syracuse. Playing in arguably the biggest game of his young life — against his brother’s team, in front of a crowd of of more than 28,000 that included his parents, Tony McIntyre and Suzette Ennis, and on national television — Ennis came up huge, displaying a dazzling array of hesitation moves, changes of speed and all-around composure en route to 20 points as No. 2 Syracuse came back from an 18-point first-half deficit to beat No. 8 Villanova, 78-62, at the Carrier Dome. Ennis’ backcourt-mate Trevor Cooney scored a team-best 21 points, hitting 5-of-8 from deep, in the win. “Tyler made some drives when we really were stuck, they were denying,” Syracuse coach Jim Boeheim said. “Whenever they’re denying, pressuring that much, there is an area of open lanes there and (Ennis) just gets to the basket better than most. But I thought Trevor and Tyler (Ennis), they were the difference today, they were absolutely tremendous today.” Boeheim has said that Ennis is playing as well as any freshman guard he’s ever had, and that’s heady praise considering he’s coached Pearl Washington, Adrian Autry and Gerry McNamara. But really, is any freshman in America as important to his team as Ennis is right now? Coming into the season, Syracuse was tied at No. 8 in the AP poll. Now they are No. 2 and just one of eight unbeaten teams in Division 1 as of Saturday. If they end up in the East Regional and go through Madison Square Garden — as Boeheim has said he would love to have happen — they will be awfully tough to beat in New York. They still have a brutal ACC schedule to go through — including two matchups with Duke and one with North Carolina, which has beaten Michigan State, Louisville and Kentucky — but Syracuse certainly looks like a team that could make it to Texas for the Final Four. And they are doing it with a freshman point guard who always dreamed of playing for the Orange because the first college basketball game he saw as a kid growing up in Canada was at the Carrier Dome. Ennis will never be considered the fastest point guard in America, but like UCLA’s Kyle Anderson, a fellow New Jersey prep star, he has an understanding of angles and an ability to change speeds and hesitate and then burst past defenders to get to the hoop. “Well he’s just clever and really good with the ball,” Boeheim said. “He kind of lulls people to sleep like he’s not going. We’re getting movement to be able to create lanes for him through pressuring. That’s one of the reasons I put Trevor back in. Mike (Gbinije) was playing good but they just leave Mike and it takes away that lane so when he’s (Trevor) in the game they’re going to play him and it opens up that lane for Tyler to get to the basket. I thought he really was tremendous. They’re a good defensive pressure team. We didn’t get a lot of assists because they weren’t helping and he was finishing, but that’s what he does. He’s very good with the basketball.” Ennis easily outplayed his older brother, Dylan, who managed just 4 points for Villanova, but trash-talked his brother anyway. “Yeah he talks the whole game,” Tyler said. “(He says) just regular stuff. I’m used to it by now. I zoned it out after a while.” Like his fellow Canadian and former CIA Bounce teammate Wiggins, Ennis is a quiet and humble kid. He’s confident in his abilities, but he’ll never tell you how good he is. He may not be as naturally talented as Wiggins, Parker, Randle or Gordon, but there’s a reason he’s now the No. 15 pick in one 2014 Mock Draft. Wherever he goes, he wins. “I’m just playing my role on my team,” Ennis told me recently. “And If we keep winning and keep being successful, I know the recognition will come.” At this point, it’s hard to deny that as inevitable truth.