D'Angelo Russell is Back in Full Force | Zagsblog
Follow @adamzagoria

D’Angelo Russell is Back in Full Force 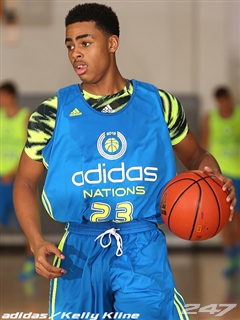 By JACK LeGWIN Special to ZAGSBLOG CHARLOTTE, N.C. –– D’Angelo Russell is back in full force after he underwent arthroscopic surgery to repair a torn meniscus two months ago. He scored 17 points in a 98-39 win over South Atlanta (Ga.) in the Wild Wing Hoops Classic on Friday afternoon. “It feels good,” Russell told SNY.tv after the win. “It feels great to be able to play with my team again.” Russell, a 6-foot-4 shooting guard out of Montverde Academy, is an Ohio State signee and is ranked 12th in the ESPN Top 100 in the Class of 2014. An undisputed leader of an 11-0 Montverde Academy team that is ranked No. 1 in the country in most national polls, Russell brings something that any top team needs, a trusted voice both on and off the court. “This has been an obstacle that I’ve had to overcome not being on the court for the past couple months,” Russell said. “But it’s great that my team still has the train of thought to listen to me even though I’m not playing on the court. They still take what I say into consideration even though I’m not playing with them. Now that I’m on the court, its so much easier to lead.” Russell will lead Montverde into a game Saturday nigh against St. James (MD) with the chance to play either Brooklyn Lincoln or Northside Christian (N.C.) on Monday night with a win. Russell is the fourth, and highest ranked member of a recruiting class headed to Columbus next year to play for Buckeye’s head coach Thad Matta. The rest of the class includes Keita Bates Diop, David Bell and Jae’sean Tate. When he was asked what he could bring to an Ohio State Buckeyes team that has a lot of young talent, his answer was simple. “Whatever they need me to bring.” Follow Jack on Twitter Photo: 247 Sports