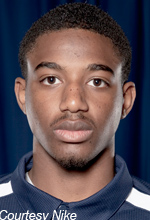 JaQuan Lyle remains one of the few big-name 2014 prospects still on the board. The 6-foot-4 Huntington (W.V.) Prep guard scored 22 of his 28 points in the second half Thursday night, when his team lost Kentucky pledge Trey Lyles and Arsenal Tech, 78-70, on ESPN. Kansas assistant Norm Roberts and West Virginia’s Bob Huggins and Larry Harrison were all in attendance. “Kansas is a real nice fit,” Lyle told the Indy Star. “They were out here tonight and I think they coming Sunday, too. I think they are picking up the pressure.” Kansas already has a pledge from 6-9 Chicago Curie forward Cliff Alexander, and Alexander and Lyle have talked about packaging together. Lyle has also visited West Virginia, which is pursuing him. “There’s a need at West Virginia,” he told the Star. “They need a big guard who can come in and make plays and I could see myself in that situation. It means a lot (to see Huggins). That’s the second time he’s been out.” Oregon, Memphis and UConn are among those also involved, while Indiana appears out. “They wanted me to sign early and I wasn’t really trying to sign early,” he said. “They kind of backed off. I probably haven’t talked to them in a month. There’s probably nothing there anymore (with Indiana).”

Melo on Kobe injury: 'It's sad, he's my brother'

Derrick Jones: No Favorites, Will Wait to Take Visits