Back From Suspension, Wilbekin Pacing Florida 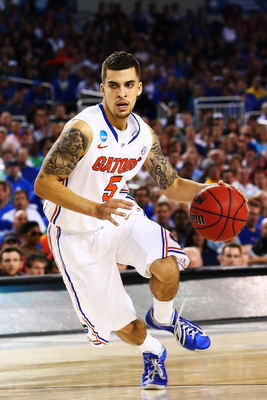 By JOSH NEWMAN Special to ZAGSBLOG NEW YORK – Scottie Wilbekin was suspended indefinitely in June, an absence that would stretch all the way into November and last the first five five games of the season. The message that came along with this indefinite suspension, the second of his career under head coach Billy Donovan, apparently got through to the Gainesville native. “Totally different kid,” Donovan said when asked how Wilbekin has grown up after the Gators defeated Memphis, 77-75, at the Jimmy V Classic late Tuesday evening. “I think sometimes, in life, you sometimes go through real difficult, adverse situations where your back gets put against the wall and you’ve got to make some corrections and changes and do things a little bit differently. It forces you to focus on yourself and take a real deep look at yourself.” Since entering the lineup at Jacksonville on Nov. 25, the 6-foot-2 senior point guard has played some of the best basketball of a career that now spans 114 games, including 34 starts at the point. On Tuesday against Memphis, his 11 points, five rebounds and three assists in 33 minutes provided a steady hand in a game that looked like it might go either way in the closing minutes. Through five games, Wilbekin is averaging 12.6 points, a team-best 5.2 assists and 3.0 rebounds. Florida is 4-1 with Wilbekin in the lineup, having beaten Florida St., Kansas and now Memphis by a combined nine points. The one loss in those five games to UConn came on a Shabazz Napier jumper in the closing seconds.  Wilbekin suffered a sprained right ankle in that Dec. 2 loss to UConn, but started Florida’s next game 10 days later against Kansas.  “He’s got a great family, he’s a great kid, but I couldn’t be any more proud of him,” Donovan said. “Where he was a year ago compared to where he is right now as a teammate, a person, a kid, understanding, awareness, sensitivity and compassion for other people, it’s a totally different level.” Wilbekin may have grown up as a person, but he has apparently grown up as a basketball player as the Gators look to get over the hump and advance to the Final Four after three straight exits in the Elite Eight. He is one of four seniors who have been a part of the last three Elite Eight teams, all of whom are seeing regular minutes this season as the 16th-ranked Gators are now 8-2 heading into a Saturday matchup with Fresno St. “He’s a smart guy, very intelligent,” breakout senior small forward Casey Prather said of Wilbekin. “I feel like he’s matured, having gone through that situation. We’re all just proud of him and excited to have him back on the floor.” “I trust him, I feel like I can communicate with him a lot better and he doesn’t come across like he’s got all the answers,” Wilbekin said. “He’s a very competitive and fiery kid. He loves competing and sometimes, he takes the weight of the world on his shoulders, but he’s really matured in a lot of ways and I’m really proud of him.” Follow Josh Newman on Twitter