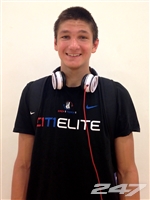 By JACK LeGWIN Special to ZAGSBLOG JACKSONVILLE, Fla.– Should Jabari Parker stay at Duke for another year? Grayson Allen is sure hoping so. “I do, I do hope that he comes back,” Allen told SNY.tv. “It would be great to play with him, but I doubt that’s going to happen, he’s got to do what’s best for him and it’s hard to pass that up.” The 6-foot-8 Parker previously told SNY.tv he could envision playing alongside fellow Chicagoan Jahlil Okafor next year at Duke, but Parker is projected as a top-3 pick in the 2014 NBA Draft. Allen, the No. 24-ranked player in the country by ESPN, is a part of the No. 1-ranked recruiting class in the country that is headed to Duke next year, and he is excited to have the opportunity to contend for a national championship “It definitely feels great to have the No. 1 recruiting class,” Allen said. “We have four great guys coming in next year with Tyus (Jones) being a great point guard that can find other people, Justise (Winslow) and myself being athletic wings, and Jahlil being the best big man in the country, I think we’ve got a real good chance next year. It’ll be exciting.” An ultra athletic and smooth shooting guard out of Providence School (Fla.), Allen put on a show against crosstown rival Arlington Country Day (Fla.), scoring 34 points, 11 rebounds and adding 8 assists in a 93-74 comeback win at the University of North Florida on Saturday night. “Playing in high-intensity games like this with a big crowd will help next year,” Allen said. “I know its nothing like what I’m going to feel at Cameron, but its as close as I can get to it at the high school level. Playing against all division one players like this, it’s great competition. There are many good players here too that I’m playing with, so it’ll get me ready for next year.” While Allen is focusing on playing his best and getting himself ready for college next year, he is watching what is going on in Durham right now, and he likes what he sees. “I feel like the Duke team this year will contend for a national championship,” Allen said. “I think they will put all of the pieces together, and we will continue it next year when us four come in.” Photo: 247 Sports Follow Jack on Twitter

Calipari's Successor Will Have Tough Job

Carolina, Indiana, UConn Among Those After Derrick Jones