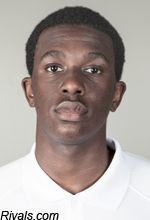 By JACK LeGWIN & ADAM ZAGORIA Prince Ali has wanted to commit to UConn for about a month, but finally made up his mind this past weekend. The 6-foot-4, 190-pound 2015 combo guard out of Sagemont (Fla.) saw Shabazz Napier and the No. 18 Huskies beat Indiana Friday night in the 2K Classic championship at Madison Square Garden and then visited the UConn campus on Saturday. After spending that day with head coach Kevin Ollie, Ali, a Bronx, N.Y., native who still has a brother and other family members there, finally decided to announce his decision on Monday. “It’s close to New York,” Ali told SNY.tv by phone Monday evening. “Me and Coach Ollie have a real good relationship. The coaching staff is good. There’s a  lot to it.” Ali chose the Huskies over Illinois, UCLA, Georgetown, Nebraska, USF and Vanderbilt, and said he held offers from all of them except UCLA and Georgetown. “Prince is a tremendous athlete with great upside,” Sagemont head coach Adam Ross told SNY.tv. “He has long arms and has the ability to be a high-level defender as well as an elite scorer.” Said New York recruiting expert Tom Konchalski: “He has ability,  he’s a talented kid.” Ali opted to commit as a junior and by the time he gets to campus in 2015, the current backcourt of Napier and Ryan Boatright will be long gone. The news of Ali’s commitment comes four days after Sam Cassell Jr. and Daniel Hamilton signed agreements to attend UConn beginning with the 2014-15 academic year. The Huskies also received a pledge from 2014 forward Rakim Lubin but he has yet to sign. “I just thought it was the right time,” Ali said. “There was no point in stalling. I knew that’s where I wanted to go. I knew they wanted me to come, so there was no point in stalling.” By the time Ali arrives, there should be playing time available in the backcourt. He said he can play both guard positions and can fit in with the UConn offense, which he said features four guards/wings and one big guy. “[Ollie] said you gotta come in and earn everything,” Ali said. “He said nothing’s going to be given to you. He doesn’t care if I’m a McDonald’s All-American. He doesn’t care if I’m a nobody coming in. He doesn’t care if I have a little bit of rep. I just gotta come in and earn. He was like you earn your minutes in practice. I earn my minutes, I earn my minutes. If I don’t, then I’m benched.” Follow Jack on Twitter