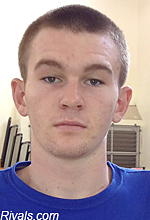 By JACK LeGWIN Special to ZAGSBLOG Six days after committing to Ohio State, Payton Dastrup has decommitted from the Buckeyes, and will sign with BYU, according to Scout.com’s Evan Daniels. A 6-foot-10, 220 pound power forward out of Mesa Mountain View High School (AZ), Dastrup is a blue-collar player down low on the post that will help the Cougars depth on the front line. “I just felt more comfortable with BYU,” Dastrup told Daniels. “After I did commit, two days following I wasn’t miserable, but there was something missing. That’s why I changed.” Dastrup joins current BYU guard Tyler Haws’ younger brother TJ Haws as the second ESPN Top 100 recruit for the Cougars in the class of 2014. A member of the church of Latter-Day Saints, Dastrup won’t join the team right away, and will take a 2 year Mormon mission, joining the team for the 2016-2017 season. Follow Jack on Twitter

Coach K: 'Shame on NBA Teams Who are Tanking'