SNY Exclusive: Magic, Jalen Say Randle Should Be No. 1 Pick

CHICAGO — Former NBA stars Magic Johnson and Jalen Rose said in exclusive interviews with SNY.tv that Julius Randle should be the No. 1 pick in the 2014 NBA Draft. “I don’t know about [Andrew] Wiggins being No. 1, I might’ve saw No. 1 just then,” Johnson told SNY.tv after his alma mater, No. 2 Michigan State, outlasted No. 1 Kentucky, 78-74, in the Champions Classic at the United Center. “Yeah, cause he is talented.” “I agree,” added Rose, working here as an ESPN analyst. “[Randle’s] aggression level, the way he scores the basketball on both blocks, his abilty to rebound. He consistently plays hard  and that’s what I really like about him, so I agree with that.” After struggling and going 1-for-5 for 4 points in the first half, the 6-foot-9 Kentucky freshman finished with game-highs of 27 points and 13 rebounds. Johnson especially liked the fact that Randle put the team on his back in the second half and showed a mean streak as Kentucky roared back from 15 down to outscore Michigan State, 42-34, after the break. 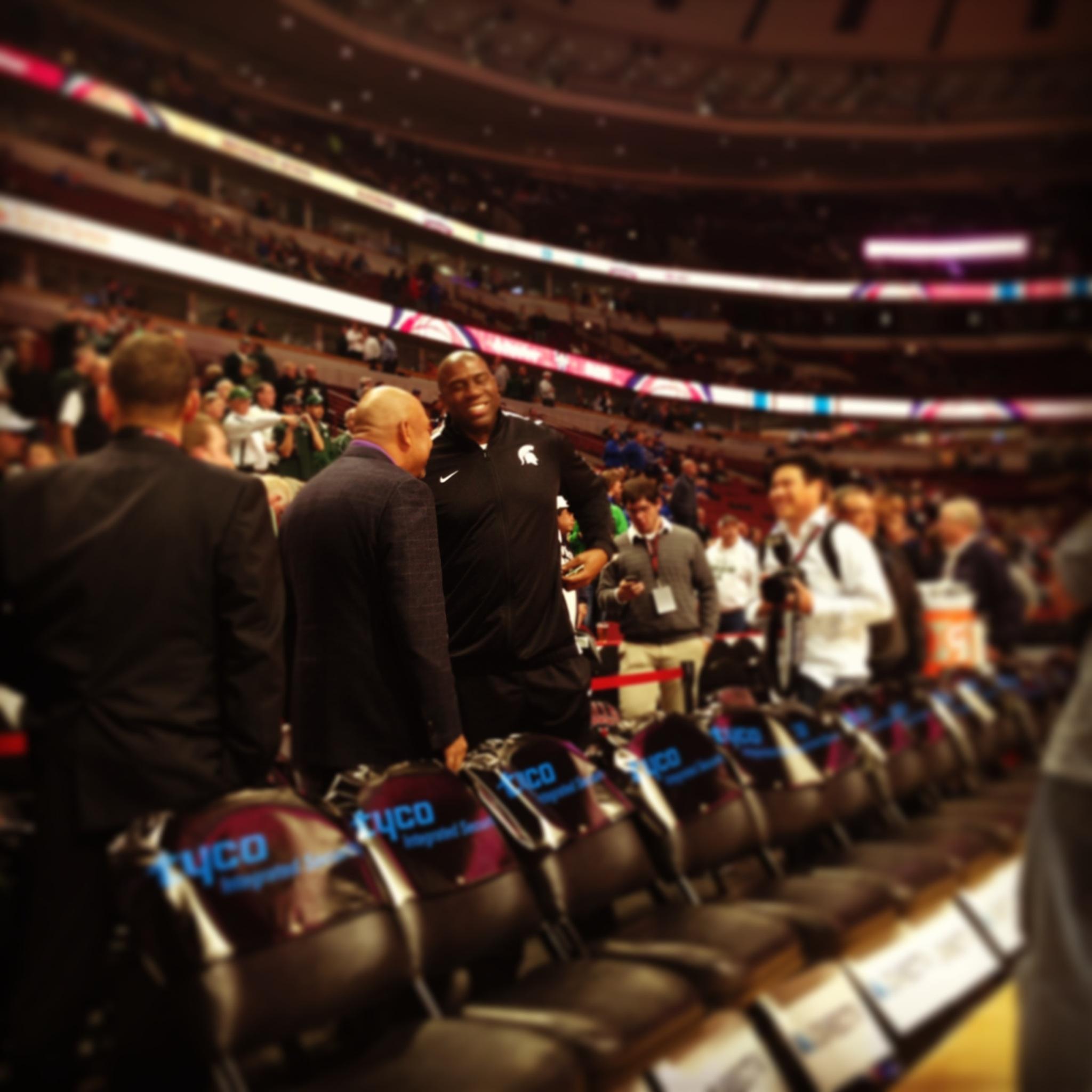 “Oh, can he play because he is so good and because he can go outside, inside,” Johnson said. “He got so many moves, whether he’s driving it or whether he’s on the post and then he’s very intelligent and he’s physical. “He’s going to be one of the best because he can put it down. There’s not too many guys who can shoot it and put it down on the floor, create his own shot. And he’s mean. I like that he’s mean and he wants the basketball.” ESPN’s Jay Williams compared Randle’s body type to LeBron James, but neither Johnson nor Rose completely buys in. “I think they’re different, to me, but both still physical,” Magic said. “So I like the physicalness of both of them but to me they’re different bodies. LeBron’s a big guy. [Randle] is a much slimmer guy.” Said Rose: “I don’t necessarily see the body comparison because LeBron is just bigger and stronger and faster than everybody he plays against, and Randle is not going to be that. “But what I will say, with his skillset he reminds me of Derrick Coleman, a guy who can shoot jump shots, he can play with his back to the basket, he’s a terrific rebounder in traffic. I call him a bull in a china shop.” Both Johnson and Rose made their comments prior to the second game of the doubleheader, when Wiggins played. The question about Wiggins for many NBA execs and scouts is whether he will consistently play hard. “I don’t have doubts about anybody that I think about as one of the top two or three prospects going into the NBA Draft,” Rose said. “It’s just Randle I think is more NBA physically ready. Wiggins I think is more like a Tracy McGrady, I think he’ s a pogo stick. I think he’s a quick athlete. I think he’s going to be a terrific player, but it may take him a year or two physically. “He’s gotta come in and guard LeBron, guard Carmelo [Anthony], guard Kevin Durant. That’s something that’s going to take time to adjust. Coming off of this stellar performance, both Magic and Jalen would take Randle No. 1 at this point. “He’s already one of the best college players,” Johnson said. “That’s a foregone conclusion. I think now it’s him continuing to improve, listen to the coaches to get ready for next season because he’s got a chance to definitely be No. 1.” Magic Photo: Jeremy Bauman

Coach K: 'Shame on NBA Teams Who are Tanking'