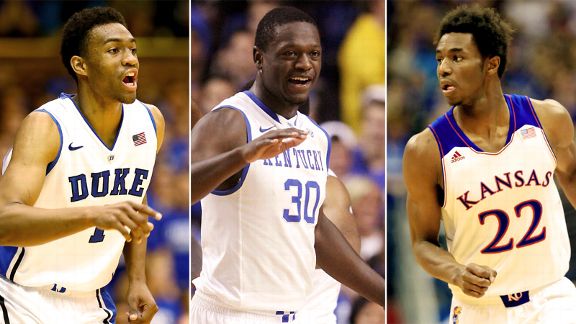 Nearly 80 NBA personnel are expected to watch diaper dandies Andrew Wiggins, Julius Randle and Jabari Parker in the Champions Classic on Tuesday night in Chicago. Media coordinator Charley Green told SNY.tv that 73 NBA credentials have been issued, and that doesn’t include the Chicago Bulls who don’t have to go through Green because the United Center is their home arena. “Probably around 80 scouts in total. This thing blew up after Wiggins committed,” Green told SNY.tv. Five of the top 10 picks in the 2014 NBA Draft according to DraftExpress.com are slated to play in the event that matches No. 1 Kentucky against No. 2 Michigan State and No. 4 Duke against No. 5 Kansas. Wiggins is projected at No. 1, Randle at No. 2, Kansas freshman center Joel Embiid at No. 6, Parker at No. 7 and Kentucky freshman point guard Andrew Harrison at No. 8. Additionally, Kentucky sophomore center Willie Cauley-Stein is projected to go No. 15, Michigan State sophomore guard Gary Harris at No. 16, Michigan State big man Adreian Payne at No. 26, Duke shooting guard Rasheed Sulaimon at No. 27 and Kentucky sophomore forward Alex Poythress at No. 28. Check ZAGSBLOG for extended coverage of the Champions Classic beginning Tuesday. **For previous articles on Andrew Wiggins, click here.

Lance Stephenson Excelling With Pacers, Wants to Stay in Indiana