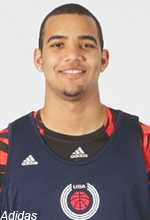 By JOSH NEWMAN Special to ZAGSBLOG Arsenal Tech (IN) 2014 forward Trey Lyles will announce between Kentucky and Louisville on Tuesday afternoon at 12:50 EST on ESPNU, Titans head coach Jason Delaney confirmed to SNY. tv on Monday morning. Should the 6-foot-10 Canadian choose the Wildcats, he will be the Class of 2014’s fourth commitment following 7-foot-1 center Karl Towns Jr., 5-foot-9 point guard Tyler Ulis and 6-foot-5 shooting guard Devin Booker, who committed just last week on Halloween. Lyles de-committed from Indiana in August, then announced in late September that he had cut his suitors down to two schools: Kentucky and Louisville. That set up an interesting recruiting showdown this year between old friends Rick Pitino and John Calipari. “The closeness to home was a big deal,” Lyles told the Indy Star at the time. “Of course, the coaches too. Both of them have won national championships and both have developed players and put them in the NBA. Going on the visits that I have to both schools, they make you feel like you are part of the family. Another big thing was the instruction the coaches give. It’s not just the assistants, but the head coaches doing a lot of the instruction.” Lyles had in-home visits with both schools in September, according to the Indy Star. He visited Louisville over the summer and visited Kentucky Oct. 18 for Big Blue Madness. “It definitely made (a decision) tougher,” Lyles told the Indy Star of the home visits. “The programs both offer a lot and the coaches both talked kind of the same way about how they want to use me – as a stretch ’4′ who can go on the perimeter. They both kind of talked the same way and definitely have a lot behind them with putting guys in the NBA and winning national championships.” His father previously told SNY.tv Trey would sign in the spring. Whoever lands Lyles will be getting a special player, a Canadian who could potentially be as good or better than recent Canadian lottery picks Anthony Bennett (No. 1 in 2013) and Tristan Thompson (No. 4 in 2012). “Trey is kind of a unique player because he is borderline 6-11 and 255 pounds, but he’s a point forward,” his dad previously told SNY.tv. “There’s not many guys that size that can bring all those things to the table… he can play 1 through 5.” Follow Josh Newman on Twitter

Cliff Alexander to Cut to 3 Before Decision (Updated)