Dante Exum: 'I want to be Top 10' in the Draft | Zagsblog
Follow @adamzagoria 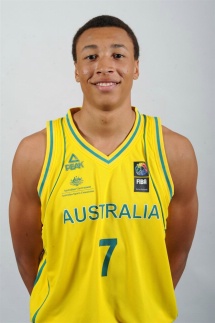 Dante Exum says he wants to go “Top 10″ in the NBA Draft and he may well get his wish next June. ”I definitely want to be picked top 10,” Exum told the Canberra Times in his native Australia. ”You go to a team that needs you and it’d be a chance to play 10-15 minutes [per game] as a rookie and possibly more depending on how you play.” The 6-foot-6 Exum is projected as the No. 3 pick in the 2014 Draft behind Andrew Wiggins of Kansas and Julius Randle of Kentucky, according to DraftExpress.com. Still, Exum hasn’t yet officially announced whether he will enter the 2014 Draft or spend a year in college and enter the 2015 Draft. ”I’m focused on finishing school then I’ll try and get over [to the US] and see a few colleges and from there see what I want,” he told the Canberra Times. ”It’s about picking the best option.” Exum graduates from the Australian Institute of Sport Nov. 22, but previously told ESPN.com he won’t enter an American college at the semester break but instead will stay and train in Australia until next summer. If college is the move, Exum lists Indiana, North Carolina, Kentucky, Michigan and Oregon as his finalists. As it stands right now, the Hoosiers are the presumed favorites. “Indiana was one of the first schools to show a real deep interest in me,” he told SNY.tv back in July. “So I decided to take a visit to Indiana earlier this year. Just so I can see their program and what they are about. But it will be interesting to compare them to some of the others school I want to look further into when I take those visits.” Exum is coming off a big spring and summer with strong showings at the FIBA U19 World Championships and Nike Hoop Summit, He was able to parlay that success into a spot on the Australian Senior National Team, which recently qualified for next summer’s FIBA World Cup by defeating New Zealand, 2-0, in a best-of-3 series to win the FIBA Oceania Championship. For now, he apparently remains undecided on his next move. “I know the decision’s playing on his mind, but he’s fairly easygoing about it,” Exum’s coach, Paul Goriss, told the Canberra Times ”He probably hasn’t got the pressure of playing in the US where there would be more hype surrounding him. Follow Josh Newman on Twitter