Cole Anthony To Delay NBA Decision Due to Coronavirus

“I have enjoyed my time at UNLV and am thankful for the support of the fans, my teammates and coaches since I have been here,” Goodman said. “However, I have felt a lot of pressure the last few months. I feel it is best for me to leave the program at this time. Even though I am from Philadelphia, I will always think of Las Vegas as another home.”

According to the Las Vegas Sun, Goodman allegedly stole $500, a pair of shoes and 26 video games in May from a friend’s apartment. He was charged Aug. 15 in Las Vegas Township Justice Court with conspiracy to commit burglary, burglary and grand larceny. The latter two are felonies.

The former N.C. State forward didn’t play at all in the Knicks’ 98-89 win over the Washington Wizards Thursday in Baltimore.

“He is a project,” Knicks coach Mike Woodson said Friday after practice. “No doubt about that. Right now the game is somewhat quick for him in terms of catching on to what we’re doing. I’ve seen that over the years since I’ve been coaching, a lot of young guys they struggle early because you throw so many things at them, it’s too fast. So we’re trying to slow it down a little a bit, spend more time with him in the classroom. A native of Pine Plains, N.Y., Lydon is ranked No. 77 in the Class of 2015 by Rivals. He chose the Orange over Boston College, Florida, Wake Forest, Iowa, Minnesota and Vanderbilt.

“Everything about it,” Lydon told the Poughkeepsie Journal when asked what he likes about the school. “It’s close to home. Just the way they play and the coaching staff. Other schools recruited me really hard.

“[Coach Jim] Boeheim’s been to quite a few of my games over the summer. My relationship with him is pretty good.” 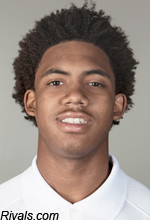 On Thursday morning, Corey Sanders chose to open up his recruitment and decommit from Central Florida.

The 6-foot-1 point guard out of IMG Bradenton Academy (Fla.) has since received an offer from Southern California, per his AAU coach Diane Neal and multiple sources.

When asked which schools were showing the most interest, two stood out at the moment to Sanders.

The 6-foot-6 Canadian wing also considered Providence and Virginia but announced for the Golden Eagles Thursday night on Twitter.

“I’m happy to announce that I’m going to be playing for @TeamCoachBuzz at Marquette.Thanks to all family, friends and [email protected]”

“It was a great fit,” Shayok told SNY.tv. “It’s a great fit for development and the relationship with the staff is great. I appreciate every school that recruited me.”

As for what skillset he will bring, Shayok said, “I will bring versatility and I’m able to play multiple positions.”

Louisville has suspended junior forward Chane Behanan indefinitely because of a violation of university policy, according to reports from Louisville columnist Eric Crawford.

“Chane Behanan is no longer a part of our basketball team. He has been suspended by the university,” Crawford quoted Louisville coach Rick Pitino as saying.

Pitino added: “It’s multiple things. Don’t ask what it is, we’re not going to tell you.”