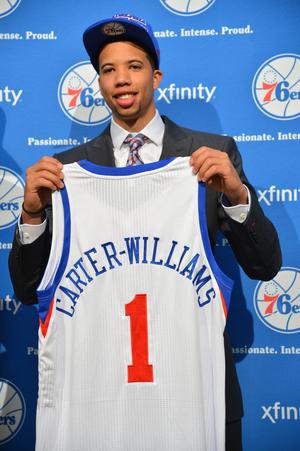 By JOSH NEWMAN Special to ZAGSBLOG NBA debuts don’t get much better than what Michael Carter-Williams was able to produce for the Philadelphia 76ers on Wednesday evening. The former Syracuse star and 11th overall pick in the NBA Draft went off, scoring 22 points to go along with 12 assists, nine steals and seven rebounds as the Sixers, who are thought by most to be tanking this season in an effort to cash in on the talent-heavy 2014 NBA Draft, stunned the Miami Heat, 114-110, at Wells Fargo Center. Carter-Williams’ numbers weren’t just impressive for a rookie, they were impressive for anybody. Since 1985, only three players (Michael Ray RIchardson, 1985; Clyde Drexler, 1986; Alvin Robertson, 1986) have had a stat line of 20-10-9-7. No one in at least the last 30 years has gone 22-12-9-7 as Carter-Williams did on Thursday. “I was figuring out their defense a little bit,” Carter-Williams told reporters postgame. “I was able to get steals. I was hitting. My shot was on. That was a big plus.” While the assumption is that the Sixers are indeed tanking with an eye on Andrew Wiggins, Julius Randle, Aaron Gordon or the like come June, Carter-Williams figures to be a major building block either way as new General Manager Sam Hinkie gave up a lot to hand the keys to the team over to Carter-Williams. In what some called a bold move, Hinkie traded away one of the NBA’s brightest young stars in 23-year old All-Star point guard Jrue Holiday to the New Orleans Hornets in exchange for the draft rights to Nerlens Noel and the Pelicans’ 2014 first-round pick, which is top-5 protected. The idea was to pair Carter-Williams and Noel, both of whom are Boston natives and one-time BABC teammates, as building blocks for the rebuilding process. While Carter-Williams is off to a flying start, Noel may miss his entire rookie season while recovering from ACL surgery.  “He was all over the place, very active,” Heat center Chris Bosh said. “His wingspan is pretty good. He has a knack for getting his hand on the ball.” Follow Josh Newman on Twitter