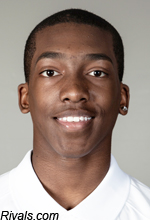 By JACK LeGWIN Special to ZAGSBLOG Georgetown had a slew of top players visit for their Midnight Madness, with Terance Mann headlining the top uncommitted players that took the trip. The 40th ranked player in the Class of 2015 by ESPN, out of The Tilton School (N.H.), Mann currently holds offers from Georgetown, Florida, Boston College, VCU, Iowa State, Florida State and Rhode Island. “Midnight Madness was good, that whole place was bumping, it was crazy,” Mann told SNY.tv. “It showed me that there are a lot of fans, and they really care about the basketball. They don’t have a great football team, so all of the kids go to the basketball games at the Verizon center.” Currently, Mann says that he has no favorites, and that he will have visit to Florida State coming up soon, most likely over an up and coming break. A strong guard that can run the point, and play off ball, Mann is a player that is blossoming at the moment. He has an improving jumpshot, as well as developing explosiveness. His mother, Daynia La-Force, played at Georgetown and is now the head women’s coach at Northeastern, which would explain his heightened IQ over many in his class. A 6-foot-5, 190 pound combo guard, Mann will have the task of taking over for departing guard Wayne Selden, who is now a guard at the University of Kansas. “It’s hard, really hard,” Mann said. “I mean, look what he’s doing now at Kansas. But I mean, look at John Joseph, who is the veteran of this team, and myself, I definitely think that we can do it.” Follow Jack on Twitter

Bluiett Expected to Decide This Week