JERSEY CITY, N.J. — Nate Pierre-Louis had just finished the sixth grade two years ago when he attended a summer camp at Seton Hall. It was there that he received his very first college scholarship offer. “It was kind of weird because I was in seventh grade and I went to their camp,” Pierre-Louis said during an interview Friday at St. Peter’s Prep, where he is entering his freshman season. “I was having good games there and they said, ‘I just want to tell you that we’re your very first offer. We just want you to know that’ and so they offered me in seventh grade.” An Irvington native who lives in Plainfield, Pierre-Louis said he was about 5 feet, 4 inches when coach Kevin Willard and associate head coach Shaheen Holloway made the offer. A year ago, he measured 5-10. Now he’s 6-2 and his doctor says he could end up being 6-5 when it’s all said and done. After the Seton Hall offer, Pierre-Louis added offers from Florida State and then Rutgers, he said.  Seton Hall later reaffirmed the offer once he entered high school Syracuse and Indiana have also expressed interest. Basketball runs in his family. His father, Frantz Pierre-Louis, played at Wagner and then with the Boston Celtics and Indiana Pacers before he went overseas to play. “In my opinion, Nate’s going to score 2,000 points in high school and he’s going to be [St. Peter’s Prep’s] best player,” Brian Coleman of the Sports U AAU team told SNY.tv. “Nate is already a 6-foot-2 point guard that can shoot he lights out the ball. He’s got a knack for putting the ball in the hole like I’ve never seen before. His floaters just go in. His layups just go in and you’re like, ‘How did he make that shot?’ I think his upside is really bright. And I think he’s gonna grow.” Coleman said Pierre-Louis’s work ethic separates him. “He’s the hardest working dude,” he said. “He’s a gym rat. He works hard. He had that Michael Jordan thing where he’s a [freakin’] killer. He wants to win. Nate wants to win and score more than you want to stop him.” Pierre-Louis is currently sidelined with a fractured left foot and wasn’t able to participate in the open gym on Friday with his St. Peter’s Prep teammates. He is due to meet with his doctor next week for a checkup on his foot. 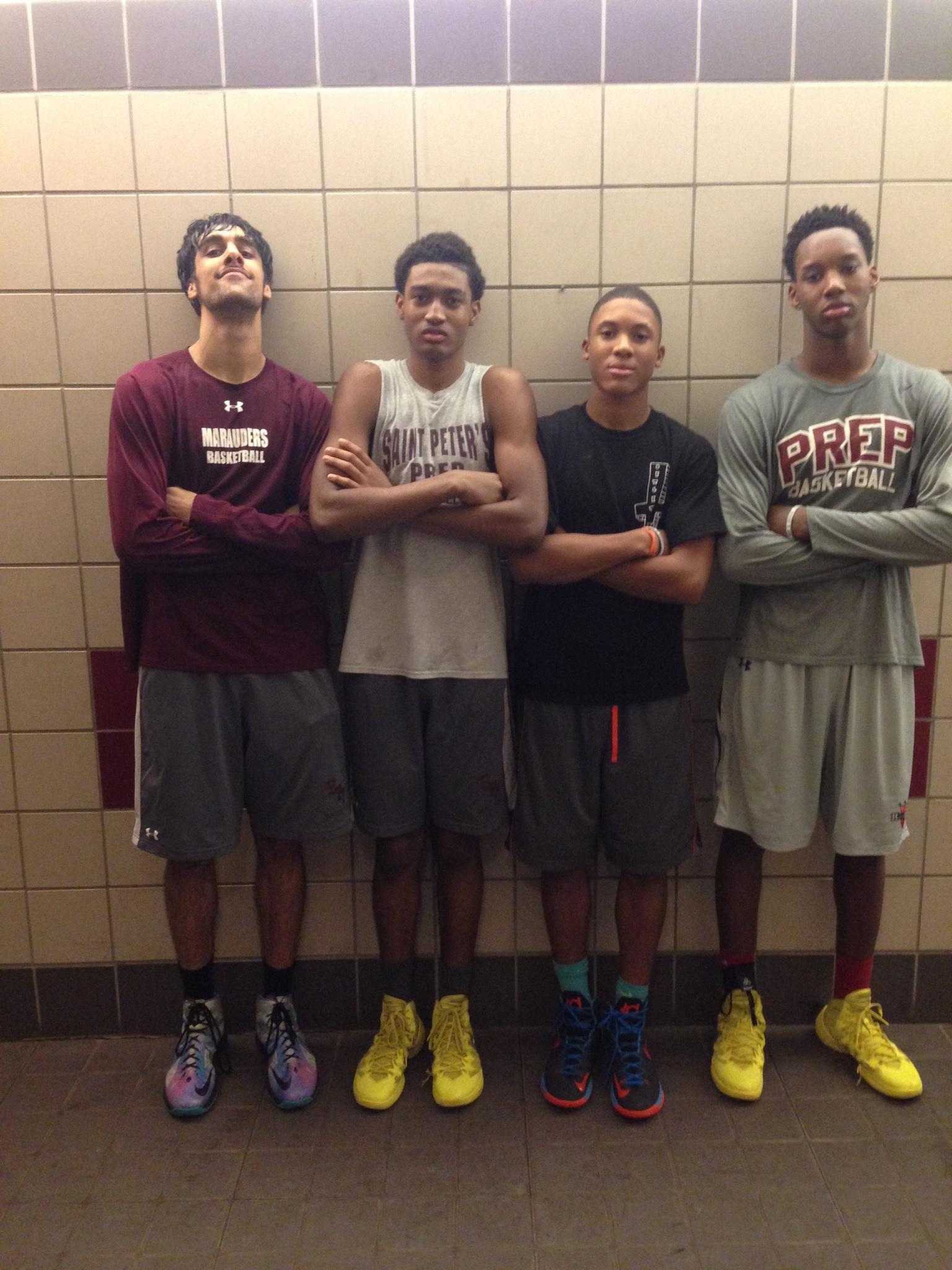 His teammates include a trio of 2016 rising stars in 6-7 Amarveer “Veer” Singh, 6-7 Kaleb Bishop and 6-5 Najja Hunter. Singh and Hunter also hold offers from Rutgers, Seton Hall and Oregon State, while Singh has offers from Villanova, Virginia and various local schools. Fordham and Wagner have offered all three 2016s. “I love my team,” Pierre-Louis said. “I’m so thankful that we have such a young core.” “It’s a special group,” St. Peter’s Prep coach Todd Decker told SNY.tv, adding that he wants his players to focus on school and academics instead of recruiting. “Out of the four of them I really don’t know who’s going to end up being the best player. I don’t know who’s going to be the best because they all have such potential. “With all the recent attention that the younger kids have been getting, one of our points is that you’ve gotta get better every day at what you do, basketball, academics. We really want them to focus on being great high school kids, players, students. The college stuff will take care of itself.” As for the “college stuff,” Villanova coach Jay Wright and Cincinnati assistant Darren Savino are due in next week. And if this group stays together, it won’t be long before big-time coaches make St. Peter’s Prep a must-see on recruiting trips to the Northeast. Seton Hall and Rutgers offered these kids early, and they will have stiff competition going forward. But Coleman said he hopes at least some of them stay local. “They won’t get them all,” Coleman said, “but if they get a couple that would be nice.”