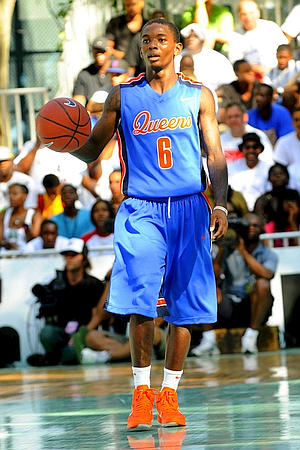 Jevon Thomas has already waited to play college ball. So he figures waiting a little while longer isn’t a big deal. The 6-foot Thomas is a Queens native who attended three high schools and also committed to St. John’s before ultimately committing to Kansas State last December. As first reported by ESPN.com, Thomas won’t suit up for Kansas State until Dec. 21 against Gonzaga because he was deemed a partial qualifier coming out of St. John’s Northwest (WI) Military Academy. “First I was a little upset but then I had to realize it’s no one’s fault but mine,” Thomas told SNY.tv. “All I have to do is wait patiently and be ready.” “Jevon is in great spirits,” his mentor, Casey Williams, told SNY.tv. “He’s maturing and enjoying his experience so far. He’s doing very well and he’ll be ready to play when it’s time.” Thomas will take over at the point for Angel Rodriguez, who transferred to Miami but is sitting out the year. “He’s very talented,” head coach Bruce Weber told ESPN.com of Thomas. “But it’ll take him a little while to get adjusted once he becomes eligible.”