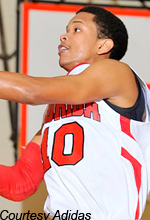 Former Miami commit Adonys Henriquez has cut hist list to five. The 6-foot-6, 195-pound combo guard out of Orlando Christian Prep Tweeted that he’s down to UCF, Vanderbilt, Creighton, Minnesota and Butler and is “looking to decide late October. Henriquez enjoyed his weekend visit to Butler and will visit UCF this weekend, Vanderbilt the weekend of Oct. 5 and Minnesota Oct. 12. “Butler was fun,” he told SNY.tv. “They have a grew new coach [Brandon Miller]. I liked their gym and their winning ways. They want me to come in and put up numbers.”   If Henriquez chose UCF, he would join fellow Orlando point guard BJ Taylor (Boone HS) in the class of 2014. “I think that we would make a good backcourt together, because we both like to score, and he’s a very good floor leader,” Henriquez previously said of playing with Taylor. “If I chose to go to UCF, we would try to make it the new Florida, and try to get people to go there.” Minnesota and Creighton are also involved. “Its all about finding a coach that knows me, knows my game, and can build me as a player and a man,” he said. Follow Jack on Twitter