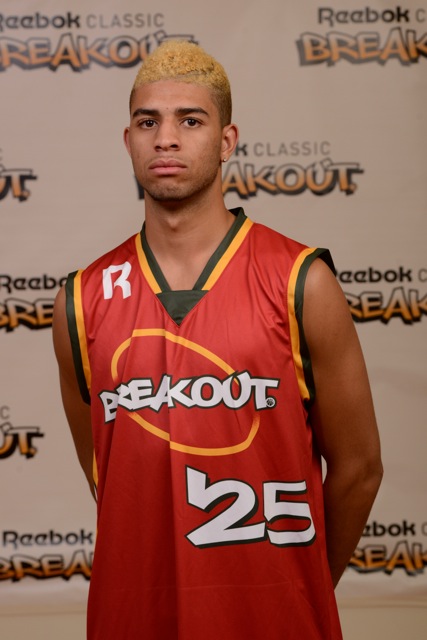 Josh Perkins has cut his list to five schools, his father told SNY.tv Wednesday. “The five are UCLA, Minnesota, Gonzaga, UConn and Kentucky,” Randy Perkins said by phone from Las Vegas where his son is playing in the Fab 48 event this week. The elder Perkins said they did not make the cut public because they didn’t want to draw a lot of attention to the list. USC, Baylor and Kansas had previously been considered. The 6-foot-2 point guard will announce his college choice Aug. 25 once he is enrolled at Huntington (W.V.) Prep. Randy Perkins also said it was unlikely his son would end up packaging with Rashad Vaughn, as the two players had discussed with SNY.tv recently in Philadelphia. “That’s kid’s talk,” he said. “They don’t know what’s best. It’s a dynamic duo for sure. That kid [Vaughn] is quite the talent. They base stuff on relationships. Where the game’s concerned, when you bring in another kid that commands as as many touches as you do you have to make sure that the institution that is recruiting you wants that. “The institution that wants you wants the ball in your hands. When you bring in another kid that requires the ball that much, it’s not a good fit. “When it comes to the friendship thing, these institutions have their own needs and it doesn’t always consist of having two kids who require a lot of touches.” Meantime, Perkins said all five schools left on Josh’s list are working hard, although Kentucky has yet to offer. He is due to announce on his birthday, Aug. 25. “Kentucky is the one that’s kind of weird,” Randy Perkins said. “There’s no official offer. But I will tell you this, we’re not going to wait for an official offer. If the 25th comes and there’s no offer then he will not be going there.” Kentucky has offered Tyus Jones and Emmanuel Mudiay at the point, and Calipari has focused much of his attention this summer on those two players. Meantime, Gonzaga coach Mark Few and Minnesota coach Richard Pitino sat side by side watching Perkins last week in Dallas. “Obviously, Pitino is putting the fullcourt press on,” Randy said. “It’s amazing those guys can sit next to each other knowing that they are both recruiting them at that level.” Minnesota and UCLA are both also involved with Philadelphia point guard Ja’Quan Newton, who recently picked up an offer from Pittsburgh. Few has been tracking Perkins hard and has been at all of his games recently. “Gonzaga has been there from day one,” the elder Perkins said. “There’s something to be said for being there from day one. When Josh is interviewed the first thing out of his mouth is he wants a coach to be there both on and off the court for him. For that, Gonzaga rates really high.” “Coach Few’s been there since day one. He’s at every game. Josh is really excited when he sees the head coach there.” UConn coach Kevin Ollie and his upbeat personality are also in the mix. Josh plans to visit UConn and Kentucky once he gets to Huntington Prep in early August. “His spirit, he reels you in with his spirit,” Randy said. “He’s a good guy. He’s anxious to get out on the visit.”