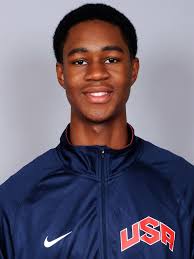 By JACK LeGWIN Special to ZAGSBLOG ORLANDO, Fla. — V.J. King is never the flashy player that catches your eye right away. He finds other ways to do so over the course of time. The fourth-ranked player in the Class of 2016 by ESPN, King led the King James Shooting Stars to a 35-point win over Hokies Elite in the first game of pool play at the 16U National Championships at the Wide World of Sports. One of the smoothest players in the country, King is listed at 6-foot-7, and was seen running the offense at the point guard spot often in the second half in the win. “I never was the most athletic player on my team, even when I was 12 and 13 years old.” King told SNY.tv. “I had to find different ways to score and standout. I just play my game, and try to be calm and patient.” He recently has added offers from Georgetown and UConn, which join offers from Ohio State, Iowa State, Illinois, Iowa, Michigan State, Wisconsin and Charlotte. “Its a great honor to see that a coach like John Thompson III recognizes my game, and he likes what he sees,” King said. “It lets me know that the work I am doing is paying off. I’m still not a full player yet though. I’m not a finished product, I’m still working on my game, but it’s very nice to see that they have offered me.” UConn coach Kevin Ollie and his staff also tracked King at Peach Jam. As for the future decision, King has three more years before he will be stepping onto a college court, but he does have an idea about what he is looking for in the future. “Not every school is fit for certain players, and I have to see which school fits my game the most,” he said. King will get the opportunity to chose when the time comes, but schools are getting after him quickly. Follow Jack on Twitter