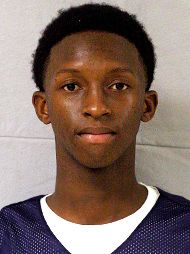 By JACK LeGWIN Special to ZAGSBLOG ORLANDO, Fla. — Playing in front of a packed court 12 at the Super Showcase 16U, Kwe Parker put on a show that included three highlight-reel dunks. Parker led the Karolina Diamonds to a win over Team NOLA in front of coaches from all over the country, including an assistant from North Carolina. A 6-foot-2 rising sophomore out of Fayetteville, N.C., he has received offers from Virginia Tech and Charlotte. In three years when he graduates from high school, he will be the first member of his family to attend college. “It really means a lot,” Parker told SNY.tv. “Everyone in my family is really proud of me.” One of the highest-flying players in the country, Parker might be most known for his mixtapes on YouTube, in which he throws down dunk after dunk, and have drawn comparisons to Seventh Woods’ mixtape. Many don’t know however, that Woods and Parker played together last summer on the Karolina Diamonds, and are still close. “We have a bit of a rivalry,” Parker said smiling. “Whenever he comes to Fayetteville, we always have to have a dunk contest.” Ranked 24th in the country by ESPN, Parker isn’t just a dunker. He has a complete arsenal of both outside and inside, he is able to knock down the long-range bombs as well as take contact in the paint. When he was asked how he has improved over the summer, his answer was automatic: “My midrange game.” Parker said. “It has really improved this summer. “I’ve always worked on that. That is the main thing that I’m working on this summer.” One thing is for sure. If he continues at this pace, Kwe Parker is a name to remember in the future. Photo: ESPN Follow Jack on Twitter