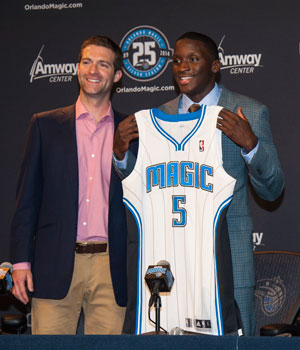 ORLANDO – No one said Victor Oladipo transitioning to point guard was going to be easy. It’s going to be an ongoing process that will extend well into training camp with the Orlando Magic in October and probably beyond. An up-and down, but promising first day at the point for the No. 2 overall pick in last month’s NBA Draft gave way on Monday morning to more of the same and further confirmation that this transition will not be happening overnight. In a 79-78 loss to the Oklahoma City Thunder, the 6-foot-4 guard with 12 points, five assists and three turnovers. He shot 2-for-11 from the floor, 8-for-10 from the foul line and committed four personal fouls. That effort came one day after 18 points, seven assists and six rebounds in a highly-encouraging first game that also saw him turn the ball over six times and shoot just 5-for-13 from the floor. Already viewed as superior athlete and perimeter defender dating back to his time at Indiana, no one believes Oladipo isn’t capable of getting over the hump, including the man himself. “I’ve never played the position at any level. so the point guard at this level, it’s a little challenging because you don’t want them to speed you up, but you still have to run all the plays,” said Oladipo, who turned his right ankle late in the contest, but said it would not affect his play the rest of this week. “You have to pick your times when to be aggressive and when not to be aggressive, but I did some good things today and some bad things today. I’m just gonna go back and learn. It’s a process, it’s my second game, so I just gotta continue to keep growing.” NBA Summer Leagues are less about the actual winning and losing as they are about the teachable moments and putting players in certain situations to see how they react. The plan for Oladipo on Monday was to put him in more pick-and-roll sets and work on decision-making out of those. James Borrego, the Magic’s summer league coach and lead assistant to Magic head coach Jacque Vaughn, viewed Oladipo’s day as mostly positive. He was aggressive in getting to the rim, not to mention the foul line, and he accomplished much of it while being guarded by Reggie Jackson. The Thunder’s third-year point guard played 70 games during the regular season, then started in nine of their 11 playoff games after Russell Westbrook went down with a torn left meniscus on April 27. In other words, Jackson is a veteran among all of the young guys and undrafted free agents this week in Orlando. “I thought Vic was aggressive, he looked fantastic at the point,” Borrego said. “He didn’t shoot it great, but he got us into our sets, was the aggressor to the rim and got us settled. I thought he played well in that matchup. It was nice to see him against Reggie Jackson. I thought he competed at a very high level today. He saw the rim, he saw there was opportunity to attack.” Follow Josh Newman on Twitter