Kenyon Martin Could’ve Been a Celtic 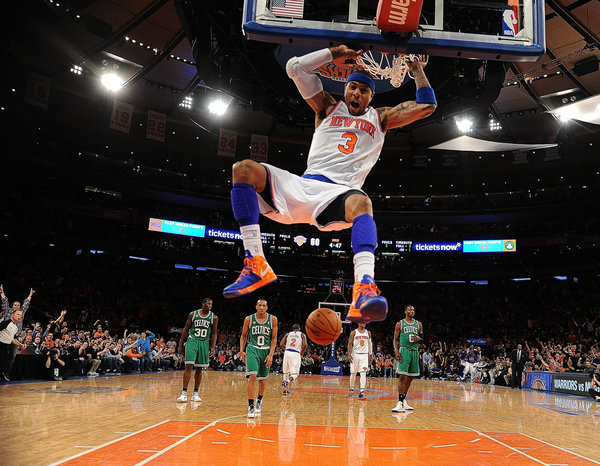 BOSTON — Carmelo Anthony doesn’t even want to imagine what it would be like if Kenyon Martin were a Celtic. “Oh, it would’ve been tough, I mean I don’t really want to think about that,” Anthony said here Friday ahead of the Knicks’ 90-76 victory in Game 3. “I’d rather talk about him with us.” Martin reiterated that his agent had discussions with the Celtics before he signed his initial 10-day contract with the Knicks in February. “I didn’t talk to them per se, my agent did,” said Martin, who was out of the NBA until the Knicks gave him a shot. “But it didn’t happen so it doesn’t matter at this point. I’m a Knick.” The 6-foot-9 Martin declined to elaborate on the possibility that he might’ve landed in Boston. “It don’t matter, man,” he said. “I’m done talking about that, to be honest with you. It don’t even matter at this point. Y’all wanna write something, y’all can. I’m done talking about it, man. “They gotta live with it. I’m a Knick now, I’m making the best of this situation.” Martin is averaging 10 points and nine rebounds in 28 minutes in the playoffs and is a key reason the Knicks are up 2-0 in the series. With Tyson Chandler still rusty after returning from a neck injury and averaging just 1.5 points and 5.0 rebounds in the series, Martin has been a huge boon as the backup center, especially on the defensive end where he provides a strong physical presence inside. Those are qualities that the Celtics surely could have used. Outside of Kevin Garnett and Brandon Bass, Boston doesn’t have much beef up front. And neither of them has played particularly well. “Defensively, what he brings to the basketball game, he’s changed our team from one identity to another,” Anthony said. “When we was kind of dabbling with our identity throughout the season, he made us a dominant force on the defense alongside the other guys we have on our team. “And he gave guys confidence on the defensive end to know that we can buckle down and believe in our team once again.” Anthony said he’s not surprised that Martin has played well despite missing most of the season. “He’s always been a guy who came in in shape and his game don’t change,” he said. “Defense, rebounding, intensity, energy. You can’t teach that. Some people have it and some people don’t.” Right now, the Knicks have Martin and the Celtics don’t. Photo: Barton Silverman, New York Times

Eli Carter Down to Two Options