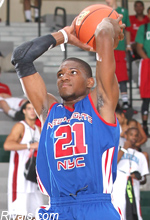 NEW YORK – The craziness at Rutgers over the past two weeks hasn’t been exclusive to Central New Jersey, but also to Kingston, R.I. and, in the case of Hassan Martin, Staten Island. The 6-foot-6 forward has signed with the University of Rhode Island, but with rumors running rampant that Rams head coach and New Jersey native Dan Hurley may head back home to coach the Scarlet Knights, it made for a tough few days for Martin. “I was a little but nervous, but he texted me and said it was all just noise and that he was gonna sign a contract and he’s gonna stay at Rhode Island,” said Martin after he scored 19 points and earned team MVP honors as his home team beat the away team, 114-102, in the Jordan Brand Classic Regional Game at Barclays Center. Hurley and Rhode Island agreed on Friday evening to that contract extension, which will keep him in Kingston through at least the 2019-20 season. This, after Rutgers reached out to him about its vacant head coaching position in the wake of the firing of head coach Mike Rice and the resignation of Athletic Director Tim Pernetti. Rhode Island was just 8-21 last season in Hurley’s first year at the helm, but is expected to quickly trend upwards in the Atlantic-10 thanks not only to Hassan’s presence and that of rising senior Xavier Munford, but due to the fact that Gilvydas Buruta (Rutgers), Jarelle Reischel (Rice) and DeShon Minnis (Texas Tech) will all be eligible in 2013-14 after transferring in. “It shows that he’s not gonna give up on us even though that’s a Big Ten school,” Martin said in referencing Rutgers’ impending move to there for the 2014-15 school year. “That’s a good school and he chose to stay at Rhode Island. That shows how much of a good coach and an honest man he is.” Follow Josh Newman on Twitter

Jaren Sina Getting Closer to a Decision