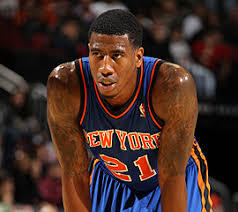 By DANIEL PONEMAN Special to ZAGSBLOG CHICAGO — Billy Taylor, a basketball recruiter and beloved figure on the West Side of Chicago, died Thursday morning after being hit and dragged by a car on the 1000 block of West Division street at 4:17 AM. Taylor, affectionately known in the basketball community as “West Side Billy,” worked closely with agent Happy Walters of Relativity Sports, a company that represents a long list of stars including Dwight Howard, Amar’e Stoudamire and John Wall.

“Billy is a well connected guy who truly worked in the best interest of our inner-city youth,” said Tim Anderson, former head coach at Chicago Crane. “He whole heartedly believed in using basketball and not letting it use you.”

Taylor was 40 at the time of his death and had three children, the oldest being his 18-year -old-son.

One athlete Taylor was very close to was Knicks guard Iman Shumpert, raised in Oak Park– a community just west of the Chicago city limits. Shumpert and the Knicks were in Chicago at the time of Taylor’s death for Thursday’s game with the Bulls, though it is uncertain if Shumpert was with Taylor before or at the time of the hit-and-run.

Shumpert went 3-for-3 for seven points in the Knicks 118-111 OT loss to the Bulls at the United Center that snapped their 13-game winning streak..

“RiP OG Billy Gates…we lost a real one yesterday #OG,” Shumpert Tweeted Friday. “I still don’t understand death…but thank God for the game of basketball bringing OG in my life. Thank God I got another game 2nite. #OG” Taylor was widely known in Chicago “Kids really respected him because he could envision a career path for a player,” friend and NBA agent Mike Naiditch told the Chicago Sun-Times. “Billy went way back to the Kevin Garnett times, and that’s kind of how he made him mark, he was like a street recruiter who tried to recruit players for agents,” said Naiditch. “All the NBA guys know Billy, and they’d try to reach into his mind. … Some teams would use him for scouting.” “If you want to get into Chicago basketball, you’ve got to get to know Billy Taylor, because he knows everybody,” said sports agent John Spencer. “People may have thought, ‘He’s just a street guy,’ but he really cared about these kids.”

“Billy was a little brother to me, he was one of the most loyal people you could ever meet, in some cases to a fault,” declared Chicago State University head coach Tracy Dildy. “A true Chicago guy. The basketball world has lost a true grassroots basketball historian.”