Kentucky Is Loaded, But Recruits Say 'It can work' | Zagsblog
Follow @adamzagoria

Kentucky Is Loaded, But Recruits Say ‘It can work’ 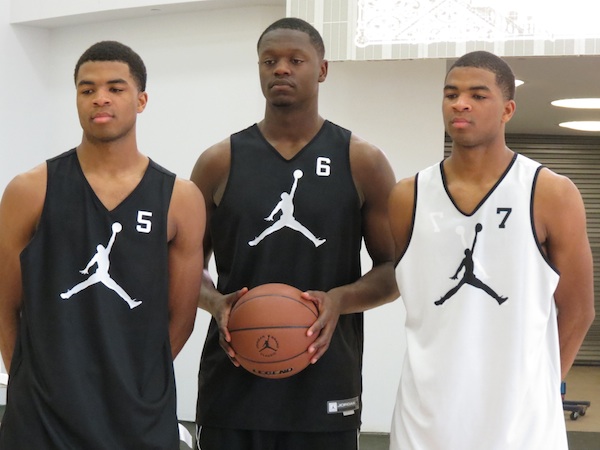 By BRIAN FITZSIMMONS Special to ZAGSBLOG NEW YORK — Now that the dust has settled from Louisville’s win over Michigan in the national championship showdown on Monday, college basketball fans are turning their attention to the anticipation for next season. Where to start? Well, that’s easy because Kentucky commit Dakari Johnson of Montverde (Fla.) Academy guaranteed the Wildcats would be the last ones standing in 2014. If that were to happen, it would mean the state of Kentucky would win three straight NCAA titles, with Kentucky winning two of the three. “Guarantee? I can guarantee we’ll work hard every day,” quipped Johnson’s future teammate, Andrew Harrison, at the Jordan Brand Classic’s media day on Thursday afternoon at Basketball City. “But if Dakari believes it, than I believe it too.” Considering Julius Randle (Prestonwood Christian, Texas), James Young (Rochester, Mich.), Marcus Lee (Deer Valley, Calif.) and Aaron Harrison (Travis, Texas) will be joining Johnson and Andrew Harrison at Kentucky next fall, maybe the Joe Namath-like statement isn’t too far-fetched. And certainly not if Kentucky adds Andrew Wiggins, the No. 1 prospect in the Class of 2013, who is considering Kentucky, Kansas, Florida State and North Carolina and is on the Jordan Brand Classic East team here along with Randle and the Harrison twins. By luring six All-Americans – all of whom will participate in Saturday’s Jordan Brand Classic at the Barclays Center in Brooklyn — John Calipari has solidified his fourth No. 1 recruiting class in his five-year tenure with the Wildcats. According to each member of the Super Six, winning is all that matters. “I don’t feel the pressure or the hype,” said Randle, a 6-foot-9 power forward who is tabbed as a top-three prospect in the country. “I know people have been talking about it, but I don’t go looking for that stuff. We want a national championship and that’s it. That’s all I want. I think it’s every kid’s dream to win it.” The pomp and circumstance that will trail this heralded group won’t ever turn to vapor, but it surely begs the question: Can a crowded rotation work in Calipari’s system? During this forgettable past campaign that ended with a loss to Robert Morris in the NIT’s opening round, Calipari was rather conservative with his rotation, more or less opting to live and die with his starting five. In 33 games, eight players received 10 or more minutes only 11 times. “Winning is all that matters. I don’t know about the other guys, but I believe we’re all going to have to work for the minutes we each get,” said Lee, who, at 6-foot-9, will use his long, lanky frame to help maintain the program’s trademark of thriving with a strong post defense. “It can work. Having a 12- or 13-man rotation can work. “We can all get a couple minutes here, couple minutes there. It can quickly be five on the court, then quickly another five on the court. We can space ourselves out in a way none of us were able to do in high school.” Implementing that unorthodox system could succeed, especially over a brutal schedule of 30-plus games including a potential deep run throughout the NCAA Tournament, and it would also alter Calipari’s formula of using defense to win games. Instead, the Wildcats would adopt a reputation for simply wearing down teams with fresh legs and turning most second halves into a track meet. Creating an identity is the easy part; getting his new group to jell while understanding their roles will be Calipari’s greatest hurdle. “We’re trying to get chemistry,” said Andrew Harrison, a speedy point guard whose pass-first mantra will likely buy him a lot of minutes early on. “Everybody knows what we each can do, so I think we’re past that stage. I think they’ll like playing with me because I give up the ball and make sure everybody gets involved. Aaron and I, we committed first, so it means the other guys wouldn’t mind playing with us – and we won’t mind playing with them.” Oddly enough, the future Wildcats are already trudging through the infant stages of meshing thanks to the McDonald’s All-American Game and Jordan Brand Classic. “Most teams don’t get all their recruits together at the same time during an all-star game,” Lee said. “Luckily enough, we’ve gotten to do this twice together.” Added Johnson: “It’s going to help a lot because then we’ll be able to get used to each other. It was a little weird at first, but (coming together) started at the McDonald’s game. All week, we’re hanging out and playing with each other.” Learning about each other’s tendencies and capabilities will be a major factor in the coming months, but for now, the group is enjoying a newly formed bond. “They’re all goofballs. They’re all really funny,” Young laughed. “We all just clicked and are becoming friends really quickly. But we’re going to have to work hard and do what we have to do. We’ll keep the rotation going, but really we’ll just do whatever it takes to win a national championship.” That’s a big enough guarantee for now. Follow Brian Fitzsimmons on Twitter here