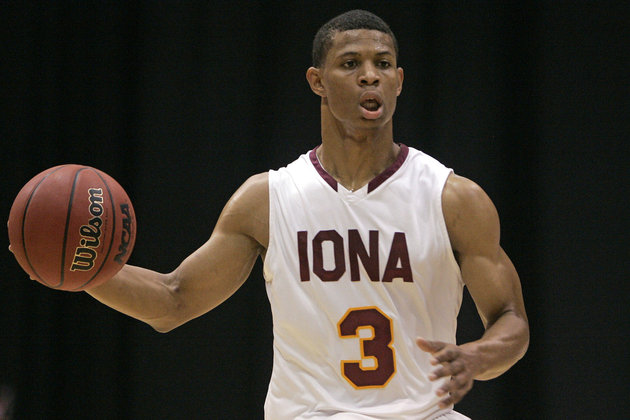 Looking to shore up its roster for just its second playoff appearance in the last 19 years,  former Iona College star point guard Scott Machado was en route to Oakland on Sunday afternoon and will sign a 10-day contract with the Golden State Warriors. The 2012 MAAC Player of the Year and Haggerty Award winner, Machado will play through his 10-day contract and is then expected to be signed for the remainder of the regular season and playoffs. Since leading the Gaels to last season’s NCAA Tournament, the Queens native has experienced a mixed bag in his first season as a professional. Undrafted, Machado had a strong showing for the Houston Rockets’ summer league team, which prompted a non-guaranteed contract for the season. He played in only six games for the Rockets and was assigned to the D-League’s Rio Grande Valley Vipers twice before the Rockets waived him on Jan. 7. Machado was signed by the Vipers on Jan. 29 before getting traded to the Santa Cruz Warriors on March 8. In 27 D-League games between Rio Grande and Santa Cruz, Machado averaged 8.4 points and 5.2 assists per game. His final D-League contest for Santa Cruz on Saturday was arguably his most impressive as he scored 22 points, shot 7-for-15 from the field and chipped in four assists and three steals. Machado’s good news comes at an especially tough time for the family. On March 28, his father, Luiz Mauro Machado, died at Kennedy Airport as Taxi and Limousine Commission officers were arresting him for illegally picking up fares. He was taken to Jamaica Hospital but could not be revived. New York City officials have ruled the death a homicide. Follow Josh Newman on Twitter