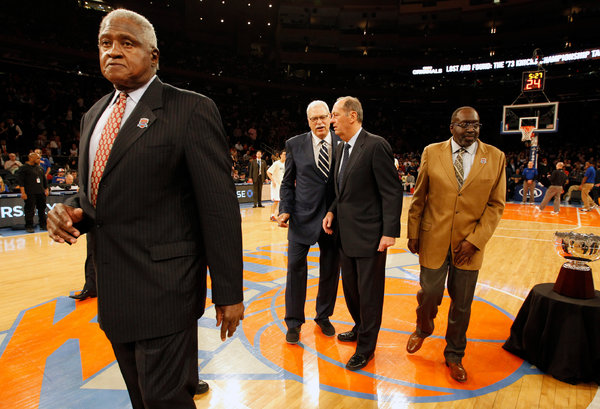 By DAN KELLY Special to ZAGSBLOG NEW YORK — On the same night that the Knicks won their 11th straight game behind yet another big night from Carmelo Anthony, Phil Jackson returned to Madison Square Garden  for a reunion with the rest of the 1973 world championship team. It has been 40 years since the Knicks last won a title and Anthony is playing like he wants to end that drought. He dropped 41 points in a 101-83 victory over the Milwaukee Bucks, and has now scored 131 points in his last three games, the most during a three-game stretch by an NBA player this season. J.R. Smith added 30 points off the bench and Jason Kidd hit a high-arching three-quarter-court shot to end the third quarter. “They’re a good team,” said Jackson, the owner of 11 championship rings as a coach. “They’ve come a long way in the last two and a half weeks. They’ve put together some games and they’re starting to make a run. This is the right time of the year to get healthy. They’ve got some injuries but they’ve kind of survived them. And they’re going to challenge. And there’s some hope in this town that maybe they’re going to win this year.” “Let’s keep our hands crossed and our fingers crossed and everything else for this new team.” The 1973 Knicks beat the Lakers that year in the Finals in five games after losing the first game of the series. The starters on the team were Bill Bradley, Walt Frazier, Earl Monroe, Dave Debusschere and Willis Reed. (The late Debusschere was represented by his son.) The last time Jackson visited the Garden as a fan was 27 years ago. “[In] 1986 I came once,” he said. “The last game it was the Knicks vs. Cleveland. I think that’s the last time I was in the Garden without something attached to it.” Jackson waxed nostalgic about his experiences in the Garden as head coach of the Bulls during those knock-down, drag-out Knicks-Bulls series in the ’90s. “Well, the first time I was booed here I was surprised,” he said. “But one of those series when the floor was moving up and down and I was standing on the floor waiting during the timeout to talk to my team. I realized how special a place this is and what a magnificent arena…and how much magic was in this building.” In addition to Jackson and the starters Dick Barnett, Jerry Lucas, Henry Bibby, Dean “The Dream” Meminger, John Gianelli and Harthorne Wingo were all at the Garden to celebrate the reunion. “We have had such a good time here in the last 24 hours, Jackson said. “We really enjoy spending time together. So it’s been fun….Perhaps having to room together as teammates made our team especially close. There were six rooms on a floor and everyone was rooming with someone. You had to be pretty close.” Jackson said  he was anticipating some quiet boos from the crowd when his name was announced but the Garden roared with approval. Only Bradley, Frazier, Reed and Monroe recieved louder cheers from the crowd. Photo: New York Times Follow Dan on Twitter

After Knicks' 10th Straight Win, Melo Says, 'I like my chances against the Heat'