Poythress to Return to Crowded Frontcourt at Kentucky 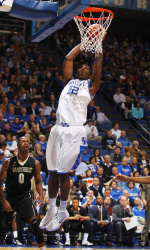 Just one day after Kentucky announced that freshman forward Willie Cauley-Stein and sophomore forward Kyle Wiltjer will return next season, the school released a statement on Tuesday evening saying that 6-foot-7 freshman forward Alex Poythress will return to Lexington for his sophomore season. “I’m really happy that, after talking with his family and evaluating his options, Alex has decided to return for his sophomore season,” Wildcats head coach John Calipari said in the statement. “Alex is a great kid with a lot of potential and I’m excited to be able to work with him next year. I believe we have only scratched the surface with Alex, and another season in college will get him closer to reaching his dreams.” Tennessee’s Mr. Basketball and the Gatorade Tennessee Player of the Year as a senior at Clarksville Northeast High School, Poythress had been projected as the No. 16 pick in the NBA Draft by DraftExpress. However, one veteran NBA scout thought it would be a good idea if he went back to school after averaging 11.2 points and 6.0 rebounds in 26 minutes per game as a freshman. “I think basketball-wise he needs to stay,” the scout told SNY.tv recently. “To me, he didn’t have it figured out. He’s tremendous physically, he doesn’t know what to do with what he has. He has a body like an NBA All-Star.” What Poythress will be returning to is a loaded, but crowded frontcourt situation in Lexington. Poythress, Cauley-Stein and Wiltjer will be joined down low by incoming freshmen Julius Randle, Dakari Johnson, Marcus Lee and Derek Willis.  Freshman big man Nerlens Noel, who was lost for the season on Feb. 12 with a torn left ACL, could opt to return to Lexington, but the 6-foot-10 shot-blocking sensation is projected as this year’s No. 1 overall pick. A year removed from the program’s eighth national championship, Kentucky went 21-12 this season and lost in the first round of the NIT to Robert Morris. “This year didn’t end like we wanted it to,” Poythress said. “I want to come back and do what we said we wanted to do and that’s win a national title. I want to develop more as a player and the competition coming in next year should help me do that.” Follow Josh Newman on Twitter

Bob Knight Looking Tamer Than Mike Rice Now....And He Was Interested in Rutgers