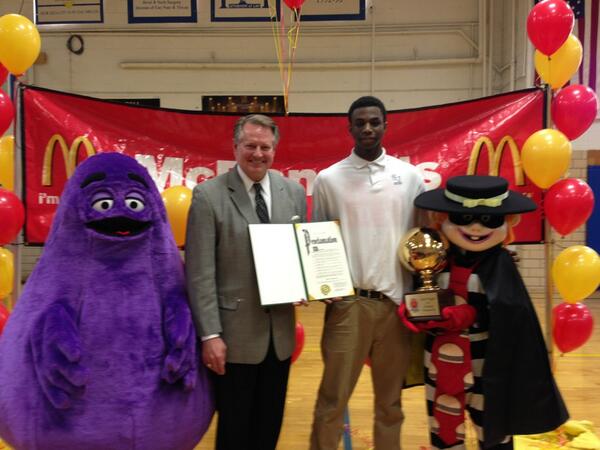 WASHINGTON — Andrew Wiggins celebrated Andrew Wiggins Day in Huntington, W.V., with John Calipari, Grimace and The Hamburglar. As seen in the above picture (which doesn’t include Calipari), Wiggins was presented with a proclamation by Huntington Mayor Steve Williams declaring it Andrew Wiggins Day. The newly-minted Gatorade National Player of the Year also hung with Grimace and The Hamburglar. On top of all that, Wiggins met separately Thursday with Calipari, who must still believe he has a shot at the 6-foot-8 McDonald’s and Jordan Brand All-American despite already having seven commits for next season, including six McDonald’s All-Americans. “Cal just reiterated that he wants Andrew at Kentucky and to see if he had questions or concerns about anything,” Huntington coach Rob Fulford told SNY.tv. “Andrew did not have any.” Wiggins is considering Kentucky, Kansas, Florida State and North Carolina and could announce at any time. If the Kentucky freshmen trio of Archie Goodwin, Alex Poythress and Willie Cauley-Stein all return, Kentucky would have eight first-round draft picks on next year’s team, an NBA Director of Scouting told SNY.tv. If Wiggins were to join the party, Kentucky would have nine first-round picks, including the top three picks in the DraftExpress.com 2014 Mock Draft in Wiggins, Julius Randle and Andrew Harrison. Aaron Harrison and Cauley-Stein are projected at Nos. 9 and 10, meaning Kentucky would have five of the projected top 10 picks should Wiggins pick the Wildcats. Photo: USA Today **For more stories on Andrew Wiggins, click here.