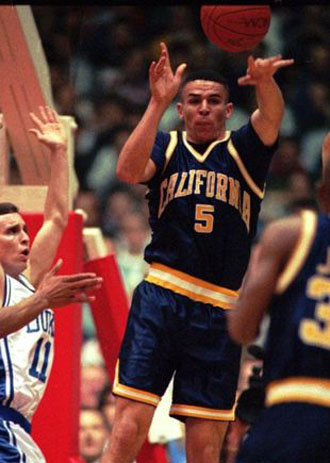 NEW YORK – Immediately to the left upon entering the Knicks’ locker room, you will find Jason Kidd‘s locker. The 19-year veteran didn’t do much of note on Saturday evening in the Knicks’ 110-84 win over the Toronto Raptors, but with Saturday marking his 40th birthday, he hung around for the media, figuring they would have some questions regarding the occasion. As Kidd answered various questions about his age and the fact that rookie forward Chris Copeland led Madison Square Garden in singing ‘Happy Birthday’ before the game began, his attention was on the flat screen television at the front of the room. Everyone was willing to excuse Kidd because the reason for the distraction was quite simple. The NCAA Tournament is in full swing, California was playing Syracuse in a third-round matchup and Kidd is one of the more memorable Golden Bears of all-time, having won PAC-10 Freshman of the Year before dethroning Bobby Hurley and two-time defending national champion Duke in 1993. That game was only made more fun by the fact that Carmelo Anthony went to Syracuse. As one would imagine, there was some playful bantering between the two leading up to the game, which the Orange claimed, 66-60. “The big thing is, I told him it wasn’t going to be a practice game like the last game they had,” Kidd said in reference to Syracuse’s 81-34 rout of Montana on Thursday in the second round. “Hopefully, Cal could keep it close and we could find a way to win. Syracuse is a very good team.” Anthony had his No. 15 jersey retired at the Carrier Dome on Feb. 23 and with good reason. He helped author the program’s seminal moment in leading it to its only national title in 2003, while picking up Most Outstanding Player honors along the way. While Kidd was busy watching the television, Anthony took a little longer than normal to enter the locker room for his postgame media session, citing not only treatment on his right knee, but watching the Syracuse-Cal game, which was late in the first half of a 9:40 p.m. tip at the time. “That’s why I’m trying rush outta here, but I had to do my due diligence with you guys,” Anthony joked when asked about the game. The No. 4 seed in the East Region, Syracuse is through to the Sweet 16 for the fourth time in the last five seasons and will oppose the winner of Sunday’s matchup between No. 1 seed Indiana and ninth-seeded Temple. That game will take place on Friday night at the Verizon Center in Washington, D.C. at a time that is still TBD. Follow Josh Newman on Twitter