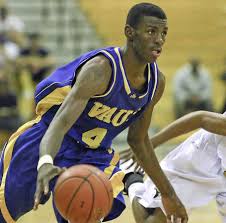 Keith Frazier and Rysheed Jordan, two of the top uncommitted players in the Class of 2013, have set announcement dates for their college plans. The 6-foot-5 Frazier out of Dallas (TX) Kimball Union will announce March 28 and is down to Texas A&M, Texas Tech and SMU, his mentor, Erven Davis, told SNY.tv. “He’s getting a little restless, so it could be sooner” than March 28, Davis said. He added that Frazier “may take a visit” to Texas A&M Friday. Meantime, the 6-4 Jordan out of Philly Vaux Roberts announced his decision date on Twitter. “Ima make the biggest choice in my life on 4/15/13 #thedayicommittocollege.” Jordan is down to St. John’s, Temple and UCLA. St. John’s coach Steve Lavin watched Jordan play last Friday. The NCAA late signing period runs April 17-May 15. Photo: RU-crazy.com