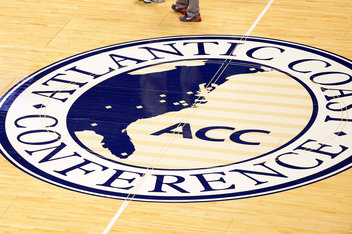 By ADAM ZAGORIA & JEREMY BAUMAN NEW YORK — The ACC is reportedly looking at bringing its postseason tournament up here to the Big Bad City sometime after 2015 when the contract with Greensboro runs out. Madison Square Garden and the Barclays Center reportedly have not put in bids to host the tournament from 2016-21, but the ACC plans to announce its plans in April or May, according to this WNCN.com report. “We’ve got some options [in New York],” Karl Hicks, the league’s associate commissioner who runs the tournament, told WNCN. Working the Syracuse-Georgetown Big East semifinal game for ESPN at the Garden, Jay Bilas said they should bring the ACC Tournament here. “It’s a no-brainer,” Bilas told SNY.tv. “Duke, North Carolina, Syracuse, Louisville, Pittsburgh, Notre Dame. It’s a no-brainer.” With their teams headed to the ACC, Syracuse coach Jim Boeheim and Louisville coach Rick Pitino both told SNY.tv they’d be in favor of bringing the tournament to the Garden, with Boeheim joking that next year he and Pitino will be eating at Denny’s in Greensboro. “I don’t know if they would go for it, like Duke and  Carolina, but I think they would benefit greatly,” Pitino said of the ACC. “I would love to see it, I don’t know if they can pull it off.” Boeheim and Pitino didn’t endorse any of these gritty New York/New Jersey locations, but we’ll throw them out there just the same: **St. John’s Carnesecca Arena: Old-school college bandbox. If it was good enough for Walter Berry, Chris Mullin and Malik Sealy, it should be good enough for anyone. **The Prudential Center: Located in the heart of Newark, this state-of-the art arena has already hosted an NCAA East Regional, where Kentucky beat North Carolina in the final. Hit Dinosaur Bar-B-Que on Market Ave. for some pulled pork sandwiches before the game. **The Rutgers Athletic Center (RAC): Another cozy bandbox that can be a tremendous homecourt when the home team is doing well. It’s also scheduled for some major renovations as Rutgers heads to the Big Ten in 2014. And hey, you can say you attended a postseason event in Piscataway. **Fordham’s Rose Hill Gym: An oasis located in the heart of The Bronx. Just don’t venture too far off campus in between games, unless you want to purchase some bootleg DVDS or get a hair weave. Jon Rothstein says to hit Pasquale’s Rigoletto on Arthur Ave. for the chicken sorrentino and oreo cheesecake. **Rucker Park: The legendary outdoor court in Harlem at one point hosted the Boost Mobile Elite 24 game featuring many of the top prep stars of recent years, including Brandon Jennings, Jrue Holiday, Lance Stephenson and Tyreke Evans. Maybe Bobbito Garcia can announce the games. **West 4th St.: Known as “The Cage,” this tiny outdoor court is located in Greenwich Village. Fans watch games from behind a fence right off the subway. As soon as the games end, you can head out to enjoy the Village…where you can get just about anything you might need. And there are no Denny’s anywhere in sight.