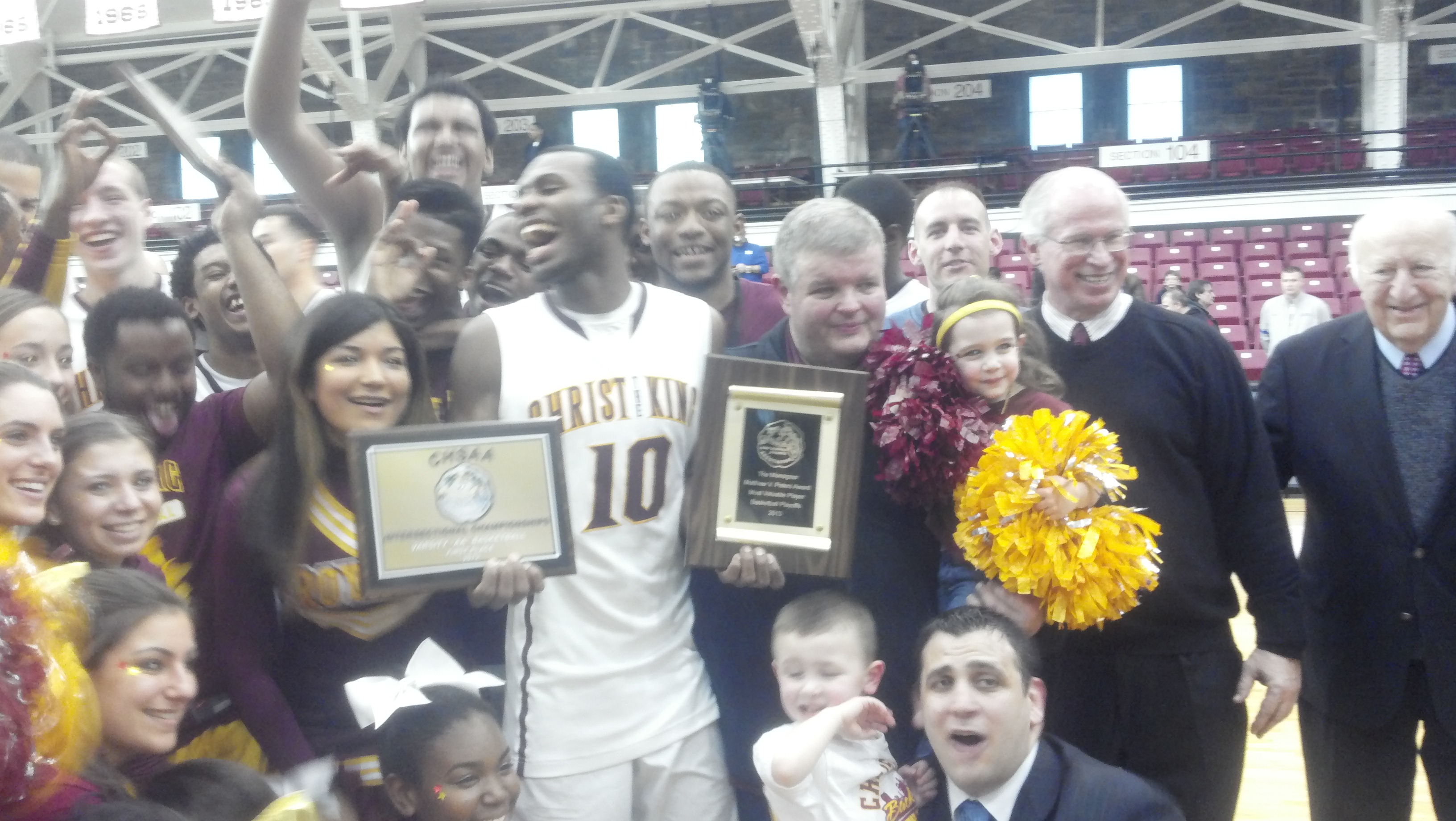 NEW YORK — They say beating an opponent three times in one season is a tough task. Don’t try telling that to Jon Severe and his Christ the King teammates. The Royals beat Bishop Loughlin for a fourth time this year, capturing the New York CHSAA Class AA championship for the third time in four years with a 78-63 victory over Bishop Loughlin at Fordham’s Rose Hill Gym. “Regular season, whatever happened, it happened,” the 6-foot-2 Severe said after going for 19 points in the win after struggling for just 10 points in the semifinal win over Cardinal Hayes. “This is the game you live for, the championship game, and we wanted to win. And it happened. And our seniors came up big.” Rutgers coaches Mike Rice and Van Macon, St. John’s assistant Tony Chiles, Cincinnati assistant Darren Savino, George Washington head coach Mike Lonergan and assistant Hajj Turner, Fordham head coach Tom Pecora and Drexel assistant Matt Collier were all on hand. The regular season league MVP, Severe is being courted by Rutgers, West Virginia, Pittsburgh, George Washington, Duquesne, Fordham and St. Bonaventure, remains uncommitted and said he has no immediate plans to take any more visits. “Nothing [new] at all,” Royals coach Joe Arbitello said. St. John’s, UConn, Cincinnati and Florida State are all involved with 6-3 Loughlin junior Khadeen Carrington, who had 24 points in the loss, while Rutgers appears to lead at the moment for Loughlin’s sharpshooting junior, Michael Williams, who scored 19. Next up for the Royals will be the New York State Federation tournament on March 22 against the New York State public school winner. UConn-bound football standout Jordan Fuchs added 17 points for Christ the King (25-3) before fouling out, 6-4 freshman sensation Rawle Alkins scored 14 points and 6-10 junior Adonis Delarosa added  13 points. After a taut first half in which Christ the King led 39-38, the game changed in the second half when Arbitello amped up the defense by putting Severe on Carrington and the 6-6 Fuchs on Williams. “I don’t know what they had in the second half, but it seemed liked we were doing a really good job,” said Arbitello, whose team outscored Loughlin, 39-25 in the second half. [youtube http://www.youtube.com/watch?v=QcMXrRzp12o] Loughlin (20-7) took its last lead at 46-43 in the third period, but 5-9 Christ the King senior guard Isaiah Cosbert hit the biggest shots of the game when he drained back-to-back 3-pointers from the top of the arc, one to close the third period and one to open the fourth, to extend a 51-49 lead to 57-49. “He hits the 3 at the end of the third quarter and then to start the fourth quarter I was going to run the play for Jon, and I was like, ‘You know what, let’s run it for Cos,” Arbitello said. “That’s what makes Jon great, is he’s so unselfish. He’s like, ‘Yeah, yeah, yeah.’ And we wound up running it for Cos and we get a huge 3 there to give us some breathing room.” The Royals outscored Loughlin 24-14 in the fourth, when Alkins, a rising star, scoring eight of his 14 points. His emphatic dunk put Christ the King up 65-41 and all but ended the suspense. “That was a closer when he dunked it,” Severe said. “He can be great. He’s just gotta play smart. He’s gonna be good.” Said Arbitello: “Rawle’s going to be a very good player at Christ the King and he had a really, really good game today, and I just hope he continues to develop.” Arbitello called the win “one of the best feelings of my life.” “I said to my wife today, my stomach was all upset, I was all messed up, but now I know why I coach,” he said. “I really do, seeing how happy they are. I was able to win one as a player, and I told them it’s something that they’ll never forget. Lamar Odom, Speedy Claxton, whenever we’re talking, we talk about the one that we won and the one that we lost.” He said he plans to give his players three days off before they resume practice to focus on a New York State Federation title “It’s not over yet,” Severe said. “We’re trying to get a ring and go to States.”