When Tyler Roberson left Union (N.J.) High School two years ago for Roselle Catholic, he might never have imagined he would be where he is today. The Syracuse-bound Roberson and Roselle Catholic (22-5) are one victory away from the New Jersey Non-Public B state championship. The only thing standing in their way? Bob Hurley’s St. Anthony club (26-1), winners of 91 of their last 92 games. “I’m really excited, I can’t wait,” the 6-foot-9, 210-pound Roberson said of Saturday’s 7 p.m. showdown with St. Anthony at Pine Belt Arena in Toms Rivers, N.J. “I mean, I’m a senior. This is my last chance to win a state title. I’m really excited.” While St. Anthony has been the state’s most dominant team for three decades, Roselle Catholic is an emerging power under head coach Dave Boff, a former college coach at Keystone and Lackawanna colleges in Pennsylvania and the former girls head coach at Governor Livingston (N.J.) High School. “It was always a goal of mine to have a program that I coached reach a level close to this,” Boff said. “I’m maybe a little bit surprised at how quickly we’ve been able to do it. We’ve been very lucky to have some fantastic players that have given us the opportunity to coach them, so the program has grown very quickly.” Adding players like Roberson, senior point guard Hakim Saintil and sophomore wing Malachi Richardson — who holds offers from schools like Indiana, Ohio State and Miami — has certainly accelerated Roselle Catholic’s development. That trio was critical in helping Roselle Catholic knock off The Patrick School, formerly St. Patrick, 77-61, Thursday in the Non-Public B South Final. “This is our first sectional championship since 1963,” Boff said. “So obviously that’s fantastic for us.” Roselle Catholic has become attractive to players like Roberson, which, in turn, has turned the program into a state and regional power. “That one thing that I’ve been telling people for a long time since I got to Roselle Catholic is that Roselle Catholic gives you the opportunity to have a fantastic education, it’s a great academic school and it’s also a high-level basketball program,” Boff said. “When parents are able to come in and see the school and see that they can get the great academics without sacrificing any of the basketball side of things, I think that that’s a real good position for parents to put their kids in.” 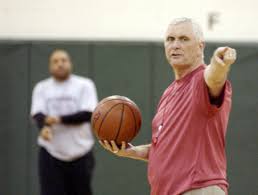 Boff now gets to match wits with Hurley, the Naismith Hall of Famer who has won the last two New Jersey Tournament of Champions titles and is the favorite to capture a third straight. The Friars feature four Division 1 commits, including Temple-bound guard Josh Brown and Oregon State signee Hallice Cooke. “I’m 35 years old now and when I got into coaching, I always hoped that I would get the opportunity to coach against guys like Kevin Boyle and Coach Hurley and really hoped that my program would be able to reach a level where we’d be able to compete against people like that in these types of games,” Boff said. “So it’s certainly something that I’m looking forward to and I think the boys are looking forward to playing a team like St. Anthony in a game that means this much.” And what would it mean to Roberson if Roselle Catholic were to pull the upset? “It would be big,” he said. “I don’t think they ever won before. It would just be a big thing for the school and a big accomplishment for everyone at the school.” Said Boff: “If we can win this game, it would obviously be the biggest win in the history of the school and I think it would cement us as a program to be reckoned with throughout the state.” If Roselle Catholic wins, Roberson will be busy competing in the Tournament of Champions beginning next week. But he also hopes to get out to see Syracuse compete in the last real Big East Tournament ever at Madison Square Garden. “My season is just about almost over,” Roberson said, “so I definitely want to get down to see a game at the Garden.” He said he isn’t sad or melancholy about the Orange leaving the Big East for the ACC; they will play their final regular season game Saturday at Georgetown. “I’m not sad,” he said. “I think it’s almost really a good thing. North Carolina and Duke are really good schools; they’re just as good for me.” Roberson was also selected for the Jordan Brand Regional Game April 13 at the Barclays Center. He will compete on the Away team against fellow Syracuse commit Chinonso Obokoh of Bishop Kearney. Syracuse-bound point guard Tyler Ennis of St. Benedict’s Prep will also compete in the Jordan Brand Classic. “It should be fun,” Roberson said. “I’m just looking forward to going out there and just playing with a lot of the different players.” Photo: NJ.com

Willard Gets Contract Extension, but Turmoil at Seton Hall Continues