Rafa Uncertain How Knee Will Respond to Hardcourts 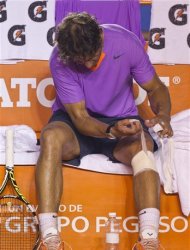 NEW YORK — As he cranks up his comeback to the tennis world, Rafael Nadal admits he isn’t certain how his balky left knee will handle the upcoming hardcourt circuit. “I’m feeling better,” Nadal said before losing to Juan Martin del Potro, 7-6, 6-4, Monday night on a hardcourt in the BNP Paribas Showdown in his first appearance at Madison Square Garden. “I have to see how the knee will answer in Indian Wells.” Nadal, ranked No. 5 in the world, should be tested at Indian Wells, the California hardcourt event that will feature 49 of the top 50 players in the world and begins Thursday. “We will see how [my knee] answers better next week in Indian Wells,” said Nadal, the 11-time Grand Slam singles champion. “That will be the big test for me, to play an official match.” Nadal’s first three tournaments back after missing seven months have been on clay, the seven-time French Open winner’s favorite surface. On Saturday, Nadal won the Mexican Open on clay by beating fellow Spaniard David Ferrer, the No. 4 player in the world, in the final. ”I started to feel free to run to every ball,” Nadal said. ”That’s fantastic for me.” But now comes the spring hardcourt season, and Nadal said he is uncertain if he will scale back his schedule going forward to accommodate his knee. “I go day by day,” he said. “We’ll see how I am and what’s the next.” ESPN analyst and newly minted International Tennis Hall of Fame inductee Cliff Drysdale said Nadal will eventually have to curtail his schedule going forward because his punishing brand of tennis takes an especially tough toll on hardcourts. “I think he should,” Drysdale said. “I think he should just cut overall. Everybody’s got to choose their places, and choose them well. You cut back too much, and that can hurt you as well because he’s a bull and he has to play a lot. I don’t have a problem with him playing that much, but the hardcourts are tough. They’re tough on the body.” Even though Nadal has won the French Open a record seven times, Drysdale believes that Novak Djokovic, the No. 1 player in the world, will be the favorite entering Roland Garros, followed by Nadal, Roger Federer and Andy Murray in that order. “I just feel like [Djokovic] is so much the best player now in the business, I just think he’s got the upper hand on anybody, including Rafa, even on clay at this point,” Drysdale said. “Add that to the fact that Rafa hasn’t played that much and has been out for so long I just think that the odds are on Novak’s side.” Said Nadal: “Roland Garros is very far away. Let’s go week-by-week as I did in the past.” Drysdale also believes that Federer, now 31 and ranked No. 2, is a threat to win at least one more major — and not just at Wimbledon, where he won last year for the seventh time and for his 17th Major championship, or at the U.S. Open, where he won five straight from 2004-8. “He could even win the French Open,” Drysdale said. “You cannot count him out in any tournament. And I say that because [if] Novak has a bad day in the third round against somebody, there are some serious players now that can surprise people. “I said two years ago that Federer was going to win another two. He won one, so in my opinion he’s definitely got at least another one in him.” ACES Speaking of Federer, Richard Kent has a new book out on the 17-time Major winner called, “Roger Federer: Back on Top.” Kent’s ninth book tracks Federer from his 2011 U.S. Open semifinal loss to Novak Djokovic, in which he blew two match points, to his victory over Andy Murray in the 2012 Wimbledon final. It is available on Amazon.com.

McEnroe: Nadal Could Be Greatest of All Time