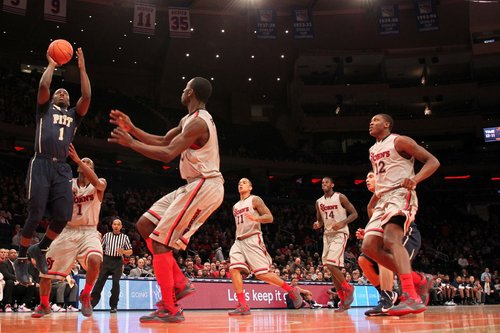 NEW YORK — Tray Woodall and his former St. Anthony teammates send group text messages to each other almost every other day. Together, Woodall, Tyshawn Taylor, Mike Rosario and Jio Fontan, went 32-0 en route to a mythical national championship under Bob Hurley at St. Anthony in 2008. They are forever bonded as brothers. Now, Woodall (Pittsburgh), Rosario (Florida) and Fontan (USC) are all in their final years of college eligibility, while Taylor is an NBA rookie with the playoff-bound Brooklyn Nets. Woodall and Rosario are headed to the NCAA Tournament, while Fontan and the Trojans will likely miss out. After going for a season-high 25 points on 8-of-14 shooting as No. 20 Pitt dispatched St. John’s, 63-47, Sunday at Madison Square Garden, Woodall spoke of his relationship with his former St. Anthony teammates. “I speak to my brothers all the time, man,” Woodall, who was born in Brooklyn and raised in Paterson, N.J., told SNY.tv exclusively. “The relationships are still the same. We talk all the time, group texts almost every other day. We just all make sure we keep each other focused on the task at hand, which is trying to get better.” Woodall appears to be getting better at the right time. He thoroughly controlled the action against the Johnnies, going for the most points by any Pitt player this season, while adding 4 rebounds and 2 assists. He entered averaging 10.9 points on the season. “I thought it was the best game he’s played for us,” Pitt coach Jamie Dixon told SNY.tv. “He was terrific in every way,” Dixon added in the media session. “I think every shot he took was a great shot. He handled the ball well and he played good defense.” Woodall missed time last year with a groin/abdominal injury, which led to him working on his shooting more since he couldn’t move  as well. He is shooting 38 percent from beyond the arc this year, compared with 39 percent last year and 29 percent the year before. “Maybe it’s all mental,” he said. “Obviously, when I was hurt I was taking a lot more jump shots, working on my jump shots, because I wasn’t able to get by guys. I can still get to the basket with the best of them, trust me.” Woodall said he enjoyed playing in front of family and friends in New York, and conceded it will be “weird” not seeing Pittsburgh “in the Garden” next year when the school joins the ACC along with Syracuse. He’s glad he’s not headed to the ACC himself. “No, I like playing St. John’s and Villanova and teams like that,” he said. “Now West Virginia’s gone because that was one of my favorite places to play. I like the Big East.” Pitt is currently 21-7 overall, 9-6 in the Big East and has been one of the league’s hottest teams after a 1-3 league start. And Woodall feels his team is poised to make a postseason run after failing to make the NCAA Tournament a year ago. “For sure, for sure, we’re definitely capable of doing that,” he said. “We got guys that keep getting better and we just want to keep playing.” And like his former St. Anthony brothers, he expects to keep winning. “We all want to win,” he said. “It’s unfortunate that Jio and his team aren’t winning, but we all come from winning programs, we all got winning mentalities. And for the most part we just all want to win. We want to keep each other focused.” One group text message at a time.