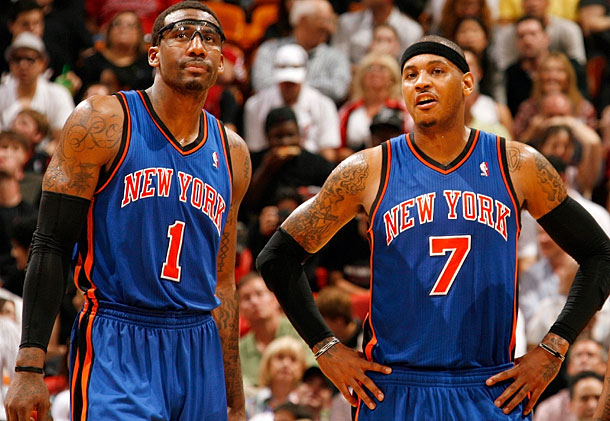 Carmelo Anthony says anything less than a trip to the Eastern Conference Finals for the Knicks is “unacceptable” and that Amar’e Stoudemire is willing to come off the bench to get there. “Winning the division, getting out the first round, getting to the Eastern Conference Finals, ” Anthony, who scored a game-high 33 points as the Knicks came from behind to beat the Minnesota Timberwolves, 94-91 Sunday, told Stephen A. Smith on the Sunday Conversation on ESPN. “I don’t see anything less than that.” Asked by Smith if anything less was unacceptable, Melo said, “It’s unacceptable. I’ll sit and tell you right now that it’s unacceptable. With the guys we have, with the team that we have, with the roster that we have, it’s unacceptable.” The Knicks are 20-7 and 12-2 at home heading into Tuesday’s Christmas Day showdown with Kobe Bryant and the Lakers in L.A. Stoudemire won’t suit up for that game — and likely won’t play at all on the upcoming three-game West Coast swing — but Anthony confirmed that Amar’e is OK with coming off the bench when he does debut — which looks like it will be in 2013. “Not at all,” Anthony said. “I done sat with Amar’e about that situation and he came out and made a statement saying that he will accept the role to come off the bench when he comes back. “A person of his caliber to come out and make that statement, that just  goes to show you that he is committed to what we have going on.” Told that the Knicks are 30-10 with Anthony and without Stoudemire and 30-33 with the both of them, Anthony said those numbers were no predictor of the future once Stoudemire does come back. “Nothing, they don’t mean nothing to me,” he said. “I tell you what, when he come back this time it will be totally different. We trust the system, we trust one another. What we have going right now as a team while he’s out, we building something, so when he come back he can fit right in with what we have going on.” What they have going on now revolves around Anthony as a legitimate early-season MVP candidate. Fans chanted “MVP” every time he stepped to the line in the final minutes of Sunday’s come-from-behind win over the Wolves. Asked by Smith about the MVP race, Melo said: “I don’t know, man. I’ll let you talk about that.” When told that Bryant said, “Is that really a question?” Melo again shrugged it off. “I’ll let everybody else talk about that,” he said. “I gotta remain humble in this situation. I can’t sit here and say I’m the league MVP. We still got four or five months left.”