Syracuse Pledge McCullough Will Stay in 2014 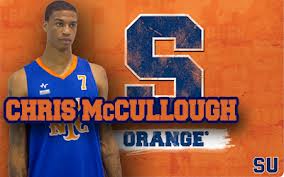 Syracuse pledge Chris McCullough will remain in the Class of 2014 and won’t reclassify to 2013, he told SNY.tv Friday in an exclusive interview. “I’m staying Class of 2014,” the 6-foot-10 McCullough said. “I had a meeting with my family and my coaches and that’s the best thing for me.” In his ZAGSBLOG entry, McCullough had previously mentioned he was considering reclassifying but has opted to change his mind. A New York City native, McCullough will remain at Brewster (N.H.) Academy for next season. “Right now I’m just focusing on school and basketball,” he said. Terrance “Munch” Williams, McCullough’s AAU coach with Team Scan, reiterated that McCullough will remain committed to Syracuse, which he chose over St. John’s and others. “He’s going to remain a Syracuse Orangemen,” he said. “He’s going to focus on hopefully winning a championship at Brewster. “He looking forward to the process in the next couple of years so he can come into Syracuse and make an immediate impact.” Williams also said that McCullough was done speaking with the media for the next several months. “This is going to be the last interview so he’s not going to be talking to the media for the next seven or eight months,” Williams said. Follow Chris on Twitter