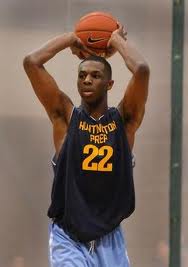 North Carolina coach Roy Williams watched Andrew Wiggins go for a double-double of 17 points and 18 rebounds Wednesday as Huntington (W.V.) Prep crushed the University of Charleston JV, 99-53. “He said he’d see us at the City of Palms,” Huntington coach Rob Fulford said of Williams. Huntington will play games Friday and Saturday in Kentucky and before heading to the City of Palms Dec. 20 in Fort Meyers, Fla. Kentucky coach John Calipari may watch Wiggins this weekend at Boyd County High in Cannonsburg, Ky. “I’m not sure,” Fulford said, adding that assistant Orlando Antigua had texted him asking what time the games were. The 6-foot-8 Wiggins is considering Kentucky, Florida State, North Carolina, Kansas, Ohio State and Syracuse. As reported here yesterday, he will take officials to the first four schools mentioned above, and the fifth is unclear. He visited FSU last week on his first official with his parents. “He’s not doing anything [else] until after our season,” Fulford said.
**For more stories on Andrew Wiggins, click here.

Big East on the Brink of Breakup (UPDATED)