Knicks, Nets Headed in Opposite Directions 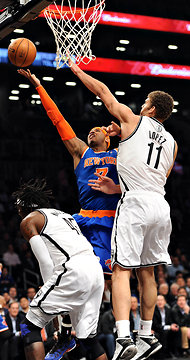 NEW YORK —  Since the Knicks and Nets last met in Brooklyn Nov. 26, the two teams have headed in opposite directions. The Nets (11-8) have gone 2-4 since the much-hyped first meeting between the two New York City teams, and enter tonight’s game at the Barclays Center having lost four straight. The Knicks (15-5) have won six of seven, including a 20-point blowout of the Heat in Miami without their star, Carmelo Anthony.  They lead the Nets by 3 1/2 games in the Atlantic Division standings. Still, the Knicks want revenge from the Nov. 26 96-89 OT loss to Brooklyn in which Anthony had a chance to win the game with a jumper at the end of regulation, only to miss his mark. “We’re ready, I mean we’ll be ready,” Anthony said after pouring in a game-best 34 points in Sunday’s 112-106 win over Denver at MSG. “I think that first game I don’t really think they did anything to beat us. We kind of beat ourselves. So we know that we got that in the back of our minds. It’s just a matter of us going out there and trying to win another road game.” The Knicks are a perfect 8-0 at home this season, but 7-5 on the road. Both teams will be without important big men. The Nets announced Tuesday morning that Brook Lopez (right foot) is out for the game, while Rasheed Wallace was listed as “day-to-day” by Knicks coach Mike Woodson following the Denver game. Marcus Camby has also missed five straight games for New York with a sore left foot. “Them guys will take it day by day, see what happens,” Anthony said. “If they come back, we would love that but now we gotta go with what we got.” After tonight’s game, the Knicks will play six straight games in the comfy confines of the Garden. That slate of games includes a slew of homecomings, including Mike D’Antoni and the troubled Lakers (9-12) on Thursday and Jeremy Lin — he of the 38-point outburst in Houston’s loss Monday to San Antonio — and the Rockets on Monday. The Nets will also make their first Garden appearance of the season on Dec. 19. The crowd for the first Knicks-Nets game appeared split about 60/40 in favor of Brooklyn, but Camby intimated that night that things would be different at the Garden. “I’m anxious to see how the crowd reacts when they come to the Garden,” he said, “see if they have any fans in the Garden.”