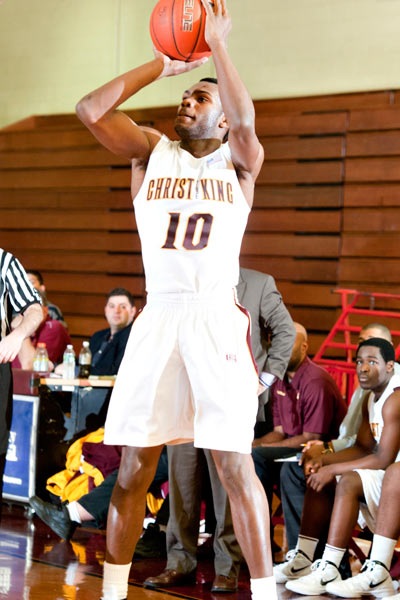 By SEVE COUSINS Special to ZAGSBLOG NEW YORK —  Jon Severe and his Christ the King Royals took the floor for their first game of the 2012-13 season on Tuesday afternoon at Cardinal Hayes in what was a shootout from start to finish. Christ the King trailed until 5 seconds left before pulling out a 71-70 victory behind Severe’s game-high 33 points. Severe started his onslaught with eight straight points to keep his team close early on. Severe continued to single-handedly punish Cardinal Hayes by nailing contested 3’s and stopping on a dime for pull-up jump shots in traffic. He had 18 at the break but the Royals still trailed, 33-30. The second half was much of the same as Cardinal Hayes guards Chris Robinson (20 points),  Shavar Newkirk (19 points) and Tyler Wilson (10 points) were relentless getting to the basket but still could not seem to find a way to stop the best player on the floor. Severe kept his team within striking distance during the second half with another 15 points. The unassuming Severe demanded the ball and scored at will seemingly every time he touched. The Royals followed suit with tough full-court pressure. Tailing by 1 late in the game, point guard Malik Harmon was fouled on a hard drive to the basket and hit two free throws with 5.2 seconds left to give the Royals their first win of the season. SEVERE TALKS SCHOOLS (UPDATED) Severe holds offers from Rutgers, Rhode Island, Duquesne, George Washington and St. Bonaventure. The Rivals No. 43 point guard in the Class of 2013, he won’t sign until the spring. It took Severe some time to warm up to the idea of the Rutgers program due to the log jam at the guard position and teams fleeing the Big East. “Now that Rutgers is leaving the Big East for the Big Ten I’m considering them,” he said. Aside from Rutgers Severe’s list is loaded with Atlantic 10 schools. “I like what the A-10 has to offer,” he said. Severe’s most recent visit was to Duquesne University. “I enjoyed myself and Coach [Jim] Ferry is a great coach,” he said. “Hee’s from LIU and that’s my style of play.” Follow Seve Cousins on Twitter

Kevin Ollie Says DeAndre Daniels Must Step It Up

Rhody-Providence to Face Off in Battle of Depleted Rosters