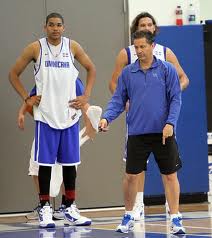 By ADAM ZAGORIA & ALEX SCHIFFER METUCHEN, N.J. — Karl Towns tried to keep the suspense for as long as he could. He narrowed down his list of schools to a final three and wouldn’t even tell his mother, Jackie Towns, what the final decision was when he woke up Tuesday morning. But in the end, the 7-foot-1 1/2, 234-pound sophomore out of St. Joe’s-Metuchen did what many expected he would — he pulled the trigger for Kentucky, but not before announcing he will reclassify to the Class of 2014. Towns reclassifying to 2014 would make him eligible for the 2015 NBA Draft. Scout.com has moved Towns to No. 7 in their Class of 2014 rankings as a result. “I have two decisions to announce today,” Towns said at a press conference before the entire school in the St. Joe’s gym. “First is that I will be reclassifying to the 2014 class and the second decision is that I will be playing basketball at the University of Kentucky.” Falcons head coach Dave Turco added that the decision to reclassify was made ‘months ago.’ Towns was also considering Duke, Florida, Michigan State, N.C. State, Rutgers and Seton Hall, but he will end up playing college for the same man who coached him this summer on the Dominican Republic National Team: Kentucky coach John Calipari. Calipari already has a loaded 2013 recruiting class highlighted by Andrew and Aaron Harrison, James Young, Marcus Lee and Derek Willis. Kentucky remains in the hunt for Andrew Wiggins, the No. 1 prospect in the Class of 2013 who visits Florida State beginning today, as well as fellow late signees Julius Randle, Aaron Gordon and Dakari Johnson. “It’s just a relieving process,” Towns said. “So much stress and so much nervousness these last few days. Now, I can enjoy the rest of my high school career knowing where my future stands.” “It was a big battle between Duke and Kentucky,” said Jackie Towns, adding that she didn’t know the final call until her son announced it but that her husband, former Monmouth basketball player Karl Towns Sr., was in on the secret. But now Calipari has a head start on future classes — and he proved once again that he can pluck the very best players from New Jersey. The Garden State has produced Cleveland Cavaliers point guard Kyrie Irving, the No. 1 pick in the 2011 NBA Draft out of Duke, and Charlotte Bobcats forward Michael Kidd-Gilchrist, the No. 2  pick in the 2012 Draft who played for Calipari at Kentucky. Towns, who says he could grow to be 7-1 1/2, could well be next in that lineage. “The program I picked is going to allow me to be the best player and person I want to be in life,” Towns said. “He is a program-changer,” Ed Bright, executive director of Towns’s AAU program, Sports U, previously told SNY.tv. “He’s a program-changer on two different levels. No. 1, obviously, because of basketball. You’re talking about a kid that will wind up 7-feet, can shoot lights out from 23 feet on in, understands the game, good passer. “He has to work on his overall agility but at 7-feet how much agility do you need? “But his character, the poise he has as a 17-year-old, I’ve never seen. How he will represent a program, even a community, he’s special. A lot of people throw special around casually. You can’t throw that around casually with Karl Towns Jr.” “You can build a program around him. If he’s coming to your school, you build a program around him.” As a freshman at St. Joe’s, Towns averaged 11.8 points, 12.3 rebounds and 3.8 blocks per game as the 29-2 Falcons won their first NJSIAA Non-Public A title. Photo: USA Today Follow Alex Schiffer on Twitter