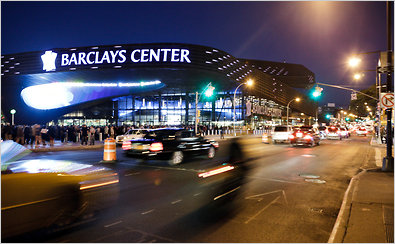 The Barclays Center in Brooklyn has already hosted defending national champion Kentucky and No. 1-ranked Indiana in this young college basketball season. Could the ACC Tournament be coming to Jay-Z’s house down the road, too? If you ask Louisville hoops legend Darrell Griffith, the answer is yes. “You can write this down,” Griffith told Louisville columnist Rick Bozich. “They’re going to play their conference tournament at the Barclays Center. This league is made for exposure in New York City.” On the day his school became the seventh Big East program to defect to the ACC since 2005, Louisville coach Rick Pitino had this to say on the matter. “The Atlantic 10 has their [postseason] tournament in Brooklyn,” Pitino told SNY.tv. “We have two years left in the Big East. I am going to enjoy Madison Square Garden for the last two years. “[We] have not spent one day in the ACC and I would never comment on where their tournament should be played.” The A-10 has a five-year contract with Barclays Center to hold their postseason tournament there; that event will run up against the Big East Tournament at Madison Square Garden, which was recently extended through 2025-26. ESPN.com’s Brett McMurphy reported in September that the 2013-15 ACC tournaments will be held in Greensboro, N.C. He reported that a decision on where the 2016-21 ACC tournaments will be held will be made in the coming months, but that neither the Barclays Center nor Madison Square Garden had submitted a bid before the deadline passed. When Syracuse and Pitt announced they were leaving the Big East, ACC Commissioner John Swofford raised the possibility of holding the conference tournament in New York. “I don’t think there’s any question that taking a look at New York and Madison Square Garden would be very appealing for Atlantic Coast Conference basketball fans,” Swofford said last year. “And even more so now with even more teams in closer proximity. With that being the media center of the world, so to speak, we’d probably be remiss if we didn’t think of it in those terms.” But that was before the Barclays/A-10 deal and the MSG/Big East extensions were announced. Still, the Barclays Center has been a big hit with college and NBA players. Just ask Carmelo Anthony. The Knicks star said he might have ended up playing for the Nets had the new arena been finished while he was still with the Denver Nuggets and considering his alternatives. “Yeah, I have to say there would have been a much better chance,” he told the New York Times after the Nets beat the Knicks in OT Monday night at Barclays. “This is a beautiful place.” Photo: NY Times