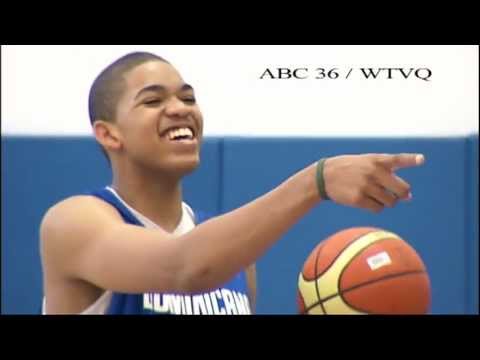 With Karl Towns set to announce his college choice Dec. 4 at St. Joe’s-Metuchen High School, he took one last visit to Kentucky this past weekend for the team’s game with LIU-Brooklyn. The Wildcats won the game, 104-75, on Friday night. “He went there just to check it out,” Karl Towns Sr. told SNY.tv Tuesday. “We went down to check it out, ride around and look at the campus.” Towns Sr. said he didn’t expect his son to take any additional visits before Tuesday’s announcement. “I don’t think he’ll be doing anything else,” he said. The visit reinforces the widespread belief that the 6-foot-11 2015 big man will pull the trigger for Kentucky at his announcement. He played for Wildcats coach John Calipari and assistant Orlando Antigua this past summer on the Dominican Republic National Team. That team faced Team USA in an exhibition in Las Vegas. Team USA was coached by Duke coach Mike Krzyzewski, who is also recruiting Towns “He’s been so quiet, he’s not even talking to anyone about it,” Towns Sr. said. “He’s been real tight-lipped about everything. He wants us to see just like everybody else.” Towns Sr. previously told SNY.tv the family was considering having Karl reclassify to 2014 from 2015, which might put him closer to potentially entering the 2015 NBA Draft. “I’m not sure of any of that,” Jackie Towns previously said of her 17-year-old son. “We haven’t really discussed anything like that and I’m not sure if something like that is going to happen.”