Anderson-Muhammad Chemistry Will be Key for UCLA Going Forward 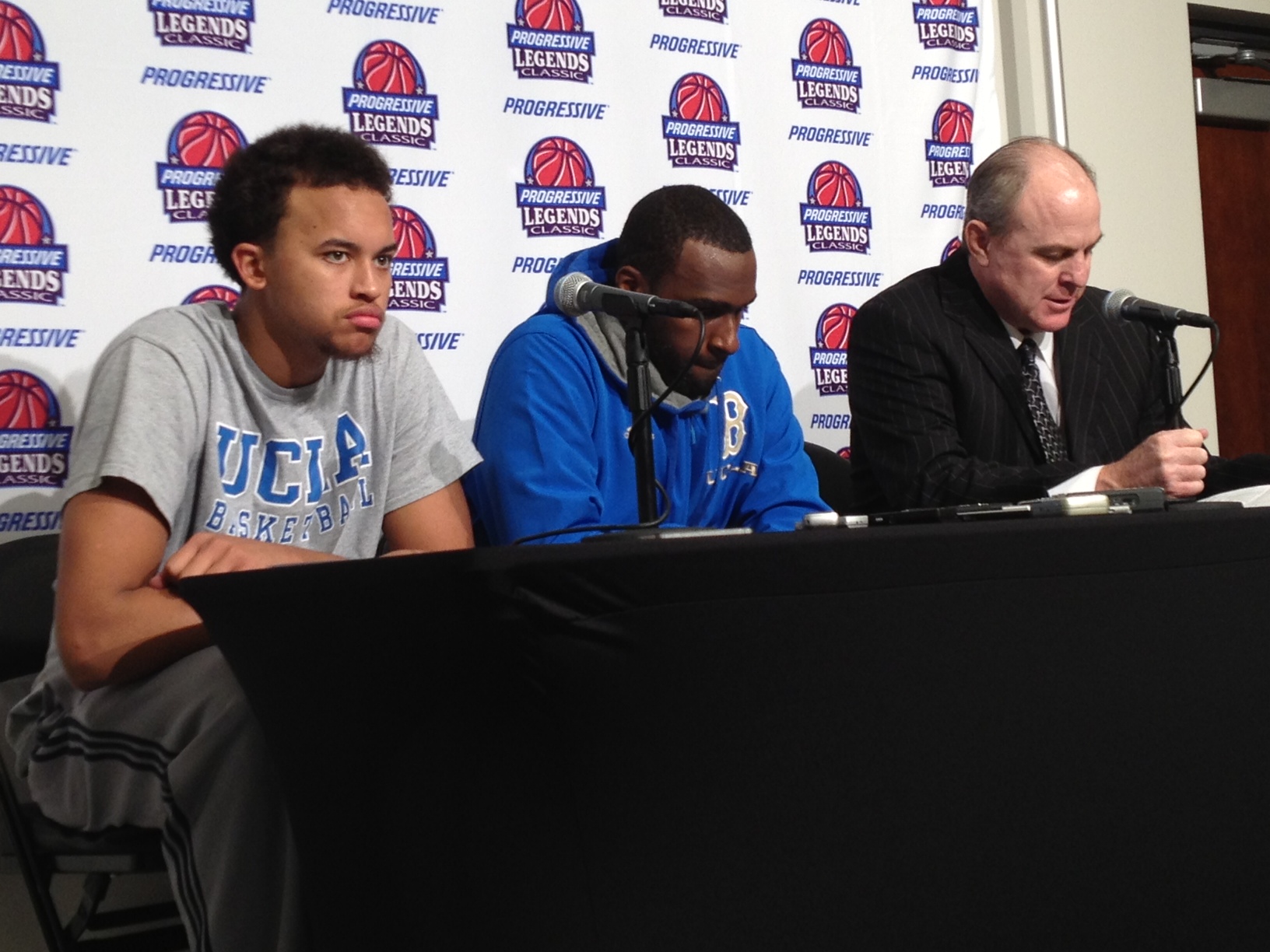 BROOKLYN — UCLA freshmen Shabazz Muhammad and Kyle Anderson are friends, roommates and teammates. Just rookies, they have both already suffered through injuries,  been investigated by the NCAA and subsequently cleared. They have an obvious chemistry off the court dating to their high school days, and their chemistry on the court could go a long way in determining how far the No. 11 Bruins go this year. So one play early in UCLA’s 60-56 victory over Georgia Tuesday night in the Legends Classic consolation game could offer a window into what the duo — one a supremely skilled passer with great vision, the other a born scorer who can put the ball in the basket a number of different ways — can accomplish down the road. Early in the second half, Anderson fired a bounce pass from the top of the arc right to a cutting Muhammad under the basket. Muhammad scored an easy layup for two of his game-high 21 points on the play, was fouled but failed to make the ensuing foul shot. “I would say the good thing about Kyle is, I’ve been playing with him for a while in these all-star games and high school, I just know when he’s going to pass the ball and when he’s looking for a guy to cut,” said Muhammad, who was playing in just his second game since being cleared last Friday by the NCAA for amateurism violations. “So I think I’m like always there when he’s there and I know when he’s going to pass the ball and it’s going to be a really good chemistry for us to build.” Anderson was making his return home to the area where he won 65 straight games at Jersey City St. Anthony, winning back-to-back New Jersey Tournament of Champions titles under Hall of Fame coach Bob Hurley. The Fairview, N.J. native, had about 20 family and friends in the building. After going scoreless in Monday’s disappointing loss to Georgetown, he finished with 9 points, 9 rebounds and 3 assists, including the bounce pass to Muhammad. 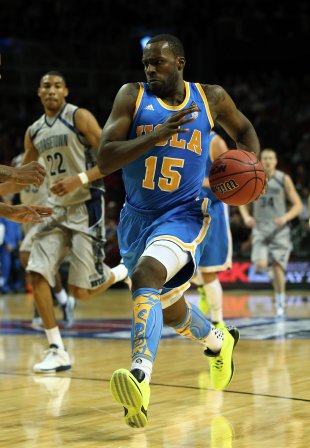 “Shabazz cuts very hard so when I’m bringing the ball up, I see his defender struggling with him cutting to the basket so I’m just able to find Shabazz, make eye contact with him and just put it in a spot where only he can get it and he’s going to score when he gets it,” Anderson said. “So it’s a pretty good connection between us.” After a disappointing loss to Georgetown Monday night, the Bruins will leave New York 1-1 instead of 0-2 thanks largely to Muhammad and Anderson. The freshmen duo combined for 30 points and 13 rebounds in the win. Had they left New York 0-2, it would’ve been a tough flight home and there may well have been a lot of angry Bruins fans questioning coach Ben Howland’s coaching style. “It would’ve been a long plane ride home coming out of this trip to New York 0-2 so that was critical for us,” Howland said. “It was real important and it felt real good to get the ‘W’ again after the sting of last night.” Still, plenty of questions remain going forward. Is this team — which at times looks like the French Army circa World War II — committed to defense? Can the out-of-shape players — of which there appear to be several — get into shape in during the season? Can Howland blend his talented, yet raw freshmen with his upperclassmen? Both Muhammad and Anderson — to say nothing of Josh Smith — need to get in better condition for this team to have any chance of an NCAA Tournament berth, to say nothing of a postseason run. “Shabazz got winded a couple times tonight because he missed over two weeks with the shoulder where he couldn’t really get up and down,” Howland said. “He’s going to get in better and better shape. We all need to but I know he will in particular.” Both players admit they’re still adjusting to the college game and its pace. They have, after all, played only a combined seven college games — five by Anderson and two by Muhammad.

“The adjustment is really a big difference, getting through screens, trailing screens, getting over screens, so I mean it’s a lot of stuff,” Muhammad said. “You have to be really smart and learn the game a lot. “It’s really been a really good change for me because coming here I really learned how to stay down in a defensive stance and really learn how to play defense to really get my game complete.” One Western Conference NBA scout was impressed with Muhammad’s ability to score, but stressed his defense is lacking. “He is going to be a tremendous scorer right away,” the scout said. “He has the ability to make the 3-pointer and attack the basket in transition. He will finish above the rim. Very aggressive and powerful when attacking the basket in the half court. He shows an ability to post up when he is being defended by a smaller man. He can pass. “My biggest issue with him was that he needs to be a much more committed defender. He struggled to defend quickness out on the floor. He is going to have a heck of a year as long as he stays healthy.” While Muhammad figures to shake off the rust as the season progresses, the 6-9 Anderson is dealing with playing a new position. A point guard whom Hurley once called “the modern-day Magic Johnson,” he is now playing the point sometimes, but also on the wing and at the four at times, too. Anderson is accustomed to playing with the ball in his hands. And who, again, he has done nothing but win during his high school career. Anderson hasn’t complained at all about playing on the wing or at the four, but he admits it’s an adjustment defending big guys in the post. “I feel it’s so much difference especially when you have to go inside and guard bigger, stronger players who are two or three years older than you,” he said. “It’s just such a huge difference but it all comes from going hard in practice and working on it there.” The NBA scout called Anderson a strong passer, but a “soft” player who needs to get stronger. “Tremendous feel for the game,” the scout said. “Excellent passer with great vision. Not a shooter. Not a defender. Needs to get stronger. He has to have more of an impact on the game when the ball is not in his hands. Needs strength because is a SOFT player. A talent.” Howland has played Larry Drew II (5 points, 2 assists) at the point, but has also used Anderson there. Despite his lack of foot speed, Anderson can actually trigger the fast break because of his ability to see the floor and pass over the defense. “I’m real pleased with both of them, how they’re handling the point guard duties,” Howland said. “I’m very comfortable with both of them offensively at the point.” Wherever Anderson plays, he’s able to pass and one thing is clear, he and Muhammad have a chemistry that enables the latter to score the ball. And that budding on-court chemistry, more than anything else, could end up deciding just how far this Bruins team goes this year.

Jurkin and Mosquera-Perea Appeal Heard, No Decision Before Georgetown

Porter Stars For Georgetown, But Gets Omitted From All-Tourney Team