Amidst Hype For Anderson and Muhammad, Georgetown Trio Shines 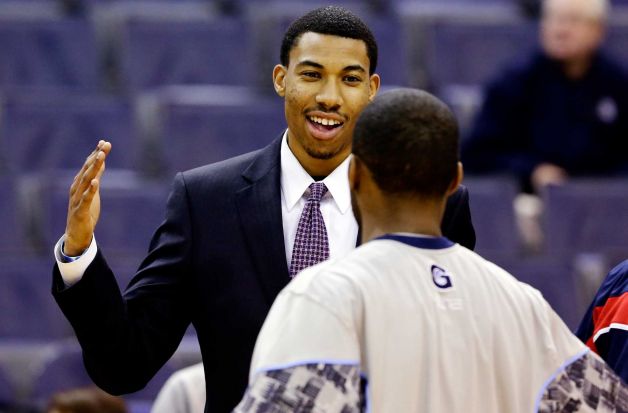 By JOSH NEWMAN Special to ZAGSBLOG BROOKLYN — Most of the hype leading up to Monday’s second Legends Classic semifinal between No. 11 UCLA and Georgetown surrounded the homecoming of Kyle Anderson and the college debut of Shabazz Muhammad. But Georgetown’s own stellar trio made sure the hype afterwards was about them. Junior guard Markel Starks had a breakout game with a career-high 23 points on 9-for-14 shooting and 6-foot-8 sophomore forward Otto Porter came back from a one-game absence to contribute 18 points, 11 rebounds, five blocks and five assists as the unranked Hoyas surprised the Bruins, 78-70, in front of a pro-Georgetown crowd at Barclays Center. Sophomore forward Greg Whittington added 13 points for Georgetown, which advances to an intriguing Legends Classic final against No. 1 Indiana, which outlasted Georgia in Monday’s other semifinal, 66-53. For Porter, a potential first round pick in the 2013 NBA Draft and a Preseason All-Big East first team selection, Monday’s game almost never happened for him. He missed Wednesday’s game against Liberty due to ‘symptoms indicative of a mild concussion’ suffered in the Hoyas’ opener against Duquesne on Nov. 11. Porter was hit in the head in the opening minutes of that game and did not return. Georgetown’s medical staff determined Porter had come along well since the incident, deemed him fit to play and he did not disappoint. “I just let the game come to me, trust the offense and if you just stay with it, you get open shots all day,” Porter said. “I just try to stay within the offense and you’ll get open shots.” The 6-foot-2 Starks isn’t quite unheralded, having started 25 games and averaging 7.1 points for the 24-9 Hoyas as a sophomore last season, but he certainly had never had a night like Monday. He seemingly got any shot he wanted on his way to those 23 points, whether it was from the perimeter or getting to the rim. “We’ve had guys going into the season that may be unknowns and when their opportunity has come, they’ve been ready,” Georgetown head coach John Thompson III said. “Markel embraced it because he stepped up last year, he was a part of it last year. As Otto said, I think this team trusts each other, they trust what we’re doing. It’s an unselfish group and they trust each other.
“I think Starks had a great game tonight,” UCLA head coach Ben Howland said. “He had 23 and that was as many points as he’s scored in the last six games of the season last year combined. That kid really hurt us. Any time we failed to trail him, he exploited us.”
Both Starks and Porter played key roles in a Georgetown 2-3 zone defense that turned Anderson’s homecoming and Muhammad’s debut into a nightmare. Anderson, a former star point guard at St. Anthony High School of Jersey City, finished with zero points to go along with seven rebounds, six assists, three steals and three turnovers. It was his first scoreless outing since his freshman season at Paterson Catholic. As for Muhammad, his debut was a mixed bag as he scored 15 points and shot 5-for-10 from the floor in 25 minutes off the bench. All told, Georgetown held UCLA to 40.9 percent shooting from the floor, while becoming the first team this season to hold the Bruins to under 80 points for a game. “We wanted to keep him contained, not contained, but just watch out for him,” Porter said of Muhammad. “We know they’re a great team. They had bigs inside that could score also, so we just tried to play defense.” Photo: Getty Images Follow Josh Newman on Twitter

Zeller, Muhammad Fail to Live Up to Hype as Potential No. 1 Picks, But There's a Whole Season to Play