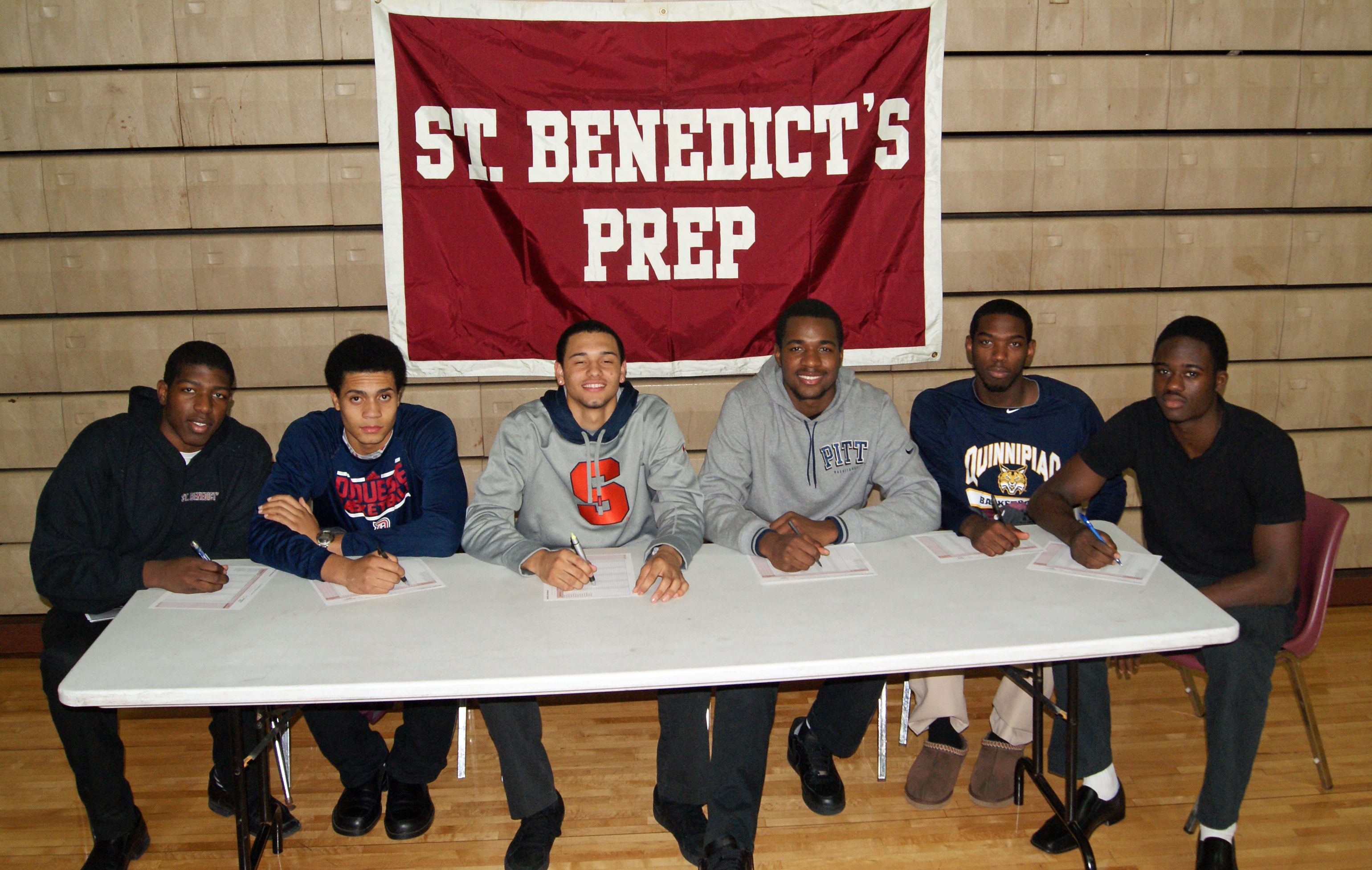 NEWARK — If a college basketball coach at a start-up program was looking for a new team of players, all he might have needed was to stop by St. Benedict’s Prep on Wednesday afternoon. That coach could’ve filled out his entire starting five — and added a bench player — simply by grabbing the six Grey Bees who signed Letters of Intent in the school’s gym. That won’t happen, of course, and instead the six players are headed to half a dozen universities. Point guard Tyler Ennis (Syracuse), small forward Mike Young (Pittsburgh), small forward Isaiah Watkins (Duquesne), power forward Denzell Taylor (Old Dominion), power forward Kevin Mickle (Central Connecticut State) and power forward A.J. Sumbry (Quinnipiac) will all go their separate ways after this season. But for now, all six are at St. Benedict’s. A seventh player, combo guard Jahmal Lane, has verbally pledged to LIU. The Plainfield native takes the SAT this weekend and plans to sign in the spring. Five of the seven play for the St. Benedict’s high school team and two — Lane and Mickle — are on the post-graduate team. Three of the them — Ennis, Watkins and Taylor — are Canadians who play for the CIA Bounce AAU program. “I think it just shows how deep we are this year,” said Ennis, part of a four-man recruiting class for Syracuse, which will enter the ACC in 2013. “We have a lot of guys that can do a lot of things. To have six guys sign compared to last year where we had one senior sign, it’s great for the school and great for us, too.” By way of comparison, fellow high school powerhouses Huntington (W.V.) Prep and Oak Hill (Va.) Academy each have four early signees, and Henderson (Nev.) Findlay Prep has three. “Our goal is to get scholarships and to put these players and young men in a position in life to have the opportunity to go to a great secondary school and university and we’re fortunate that this year every one of our seniors is getting a scholarship,” St. Ben’s head coach Mark Taylor told SNY.tv. “We’re very excited about that. It says a lot for our school both academically and the type of player and young man we’re bringing in.” Ironically, the 6-3 Ennis and the 6-8 Young are both headed to schools that are currently in the Big East but will join the ACC next year. “It was just something that was ironic and it just happened,” Young said. “We were both happy that we’ll be playing each other twice a year for the next four years depending on how long each of us stays, if the situation grants that one of us goes to the NBA. But we’ll be playing each other for two years to the next four years, so we’ll be keeping in touch and we’re both happy about that.” Make no mistake, with all the talent at St. Ben’s, the goal is to compete for a mythical national championship. St. Ben’s lost in the quarterfinals of the ESPN Rise National High School Invitational last year and finished 35-3. This year the team’s schedule includes games against Montrose (Md.) Christian, St. Anthony and potentially Montverde (Fla.) Academy during the Gulfshore Shootout in Florida. “Any school that’s considered ranked pretty high, I want to play them,” Young said. “You can only be considered the best if you play the best.” “Our goal is to compete every night and play the best competition,” Taylor said. “We want to play everybody out there.” Everybody in the high school basketball world would love to see St. Ben’s play Huntington Prep since both teams have several Canadians who are CIA Bounce teammates. Huntington Prep features Florida State-bound shooting guard Xavier Rathan-Mayes and uncommitted small forward Andrew Wiggins, the No. 1 recruit in the nation who will sign in the spring. “Yeah, definitely,” Ennis said when asked if he’d like to play that game. “Coming to a national school, we want to play the top competition. So being able to play the No. 1 player in the country with a bunch of other top players would be a great game to be a part of.” Asked who would cover Wiggins, Watkins said, “Anybody could cover Andrew. I’ll cover Andrew myself. I don’t care. But I would love to play the game and I’d be excited to play it.” Taylor said he wants to play the game, but Huntington Prep coach Rob Fulford  said, “Our schedule is full. I talked with Mark a few months back. We just couldn’t get dates ironed out. We will play next year for sure.” Photo: St. Benedict’s Athletics