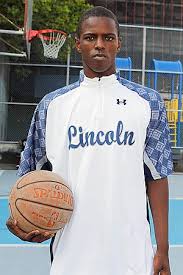 By SEVE COUSINS Special to ZAGSBLOG BROOKLYN — The New York trio of uncommitted guards Khadeen Carrington, Jon Severe and Isaiah Whitehead proved to be too much for the New Jersey squad as the New Yorkers handled them, 112-98, Sunday night in the Sharette Dixon Memorial Classic at Bishop Loughlin High School. The trio controlled the pace of the game, scoring and dishing to Rhode Island-bound forward Hassan Martin of Curtis High, who finished with 22 points, and uncommitted 2014 forward Chris McCullough of Brewster (N.H.) Academy, who tallied 17. Whitehead, a powerful 6-foot-4 junior guard from Lincoln High, got anywhere he wanted on the floor, shooting from NBA range en route to 10 points while also finding McCullough for some alley-oops.  Could that foreshadow a potential college pairing? “We talk about maybe playing together at Syracuse all the time, but that’s the only school,” Whitehead, who attended the Syracuse Elite Camp in August with McCullough, told SNY.tv. “I don’t know all the schools he’s looking at.” Whitehead is also considering UCLA, Louisville, Florida, Rutgers, Seton Hall, St. John’s, Kentucky and Miami in no order. McCullough seemed to always be in the right place at the right time and Whitehead had no problem finding him. “Our court chemistry is crazy !,” Tweeted McCullough. Syracuse-bound point guard Tyler Ennis of St. Benedict’s Prep did not attend the game for New Jersey but he has told SNY.tv that he would like McCullough to join him at Syracuse. “Tyler hit me the other day on Twitter,” McCullough said. McCullough is also hearing from St. John’s, Kansas, Louisville, UConn and Kentucky. He attended a St. John’s practice this week. CARRINGTON, SEVERE TALK SCHOOLS **Carrington, the 6-3 guard from Bishop Loughlin, said he’s been hearing from Rutgers, Cincinnati, Pittsburgh, Providence, St. John’s and UConn, just to name a few. Carrington attended UConn’s Midnight Madness two weeks ago and said, “I enjoyed my time up there.” When asked how he felt about coach Kevin Ollie’s recent comments in the New York Post raving about New York City guards, Carrington said, “ I see myself up there with the type of guards UConn has had from New York.” **Severe, the 6-2 guard from Christ the King, seemed to have a pretty good on-court chemistry with Martin, the Rhode Island commit with whom he took a recent visit to the Rhody campus. “We’re cool; we’ve talked about possibly playing with each other later on in the future,” said Severe, who listed Rhode Island, George Washington and St. Bonaventure as some of his favorites who are expressing the most interest. FREE THROWS **West Oaks Academy power forward Jordan Washington scored 19 points en route to the MVP Award for New York. **Georgetown-bound Reggie Cameron of Hudson (N.J.) Catholic led the Garden State squad with 23 points and took home the Sportsmanship Award. **Future Pitt Panther Mike Young of St. Benedict’s Prep handled McCullough down low for a while and scored 21 points Jersey. **Dayton pledge Dayshon Smith of Putnam (Conn.) Academy scored 11 points for Jersey. **Linden (N.J.) forward Quadri Moore, who two weeks ago visited Seton Hall and Rutgers, added 10 points. (Some stats courtesy Rivals.com)