Mom: Randle Could Play With Lee at Kentucky 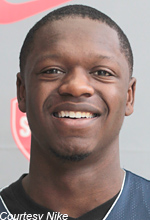 Julius Randle’s mother says her son is still considering Kentucky even after the commitment of Marcus Lee and that he will commit in the spring as originally planned. “We’re happy for the young man and his family,” Carolyn Kyles told SNY.tv Saturday in reference to the 6-foot-8 Lee, who pledged to Kentucky last week, becoming the fifth member of John Calipari’s 2013 recruiting class. “That was their commitment [based] on what was best for Marcus. Great players complement other great players on their team. Julius and his family will talk in the spring and decide the best place for him. Nothing has changed his thought about Kentucky. He’s still considering Kentucky.” Lee and Randle are both power forwards, as is 2013 Kentucky pledge Derek Willis, yet Calipari has become a master at getting multiple great players to play together, even if they play the same position. He was able to land a commitment from Michigan shooting guard James Young even after twins Aaron and Andrew Harrison committed. Aaron is also a wing player. Randle also went out of his way in  his USA Today blog to point out that he’s cool with the Harrisons and could envision teaming up with them with great success. “Potentially playing with two great guards would make it easier for me,” he wrote. “I think that we would have a legit shot to win a national championship in our first year because I don’t see any guards in the country that would be better than them.” Kentucky also remains in the mix for 6-8 small forward Andrew Wiggins of Huntington (W.V.) Prep, who may or may not reclassify to 2013 from 2014, Kentucky is also involved with 2013 power forward Aaron Gordon, who is visiting Arizona this weekend, is down to five schools and will commit in the spring. The Wildcats remain involved with small forward Tyler Roberson of Roselle (N.J.) Catholic, who says he will still visit in November despite the recent Lee commitment. The 6-9 Randle recently cut his list to six schools — Kentucky, Kansas, Florida, Oklahoma, N.C. State and Texas. He is on an unofficial to Texas this weekend and will take an unofficial to Oklahoma Oct. 27 for the Notre Dame football game. He has already visited Kentucky and Florida. Kyles said her son will visit N.C. State sometime in January. As for rumors that he might sign in the fall, she said those were false and that he remained committed to signing in the spring. “The spring,” she said. “He wants to take his remaining visits and see some games in person. Don’t know how the rumor about the fall/ in two weeks got started.”